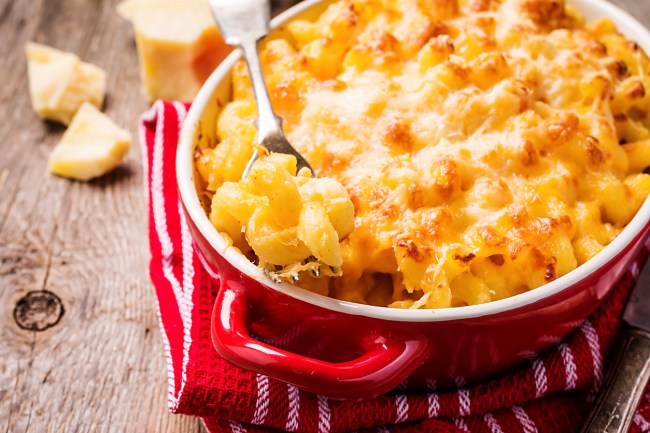 If you could select one food to eat every day for every meal, what would you pick? One Florida man has taken this preposterous hypothetical situation and made it his real life. The man has only eaten nearly only mac and cheese for the last 17 years, but he desperately wants to try other foods and is not able to.

He keeps a week’s supply of mac & cheese at his house at all times. Austin even has a “go-to pan” to cook his mac and cheese. Like most people, Austin views mac and cheese as a comfort food, but he takes it to another level.

Nine times out of 10, Austin is eating Velvetta shells. Other brands Austin enjoys is Annie Anns and Bob Evans, which is a microwavable macaroni & cheese. The mental aspect of his bizarre obsession causes Austin to only eat a few varieties of mac & cheese. He loves Velveeta mac & cheese, be he won’t even eat the Velveeta mini mac & cheese.

He gets nauseous just thinking about eating bacon-flavored mac and cheese. He will only eat regular cheddar cheese and is disgusted by the four cheese variety.

Davis understands that only eating mac and cheese is bad for his health. Austin admits that he is “sick of” mac and cheese, but at the same time, he “doesn’t want anything else.” Austin acknowledged that he has tried to eat other foods, and he puts blinders on when he sees foods other than mac & cheese.

If Austin is able to work up enough motivation to try new food other than mac & cheese, then things like texture and consistency make him sick. Even if he loves the flavor of the new food, his body won’t allow him to enjoy the food. Austin will get an involuntary gag reflex, sometimes he’ll even puke, even foods he desperately wants to eat. But nothing grosses him out as much as meat.

Austin saw a video titled “5 People Who Only Eat 1 Thing” by YouTubers Good Mythical Morning that revealed he suffered from an eating disorder.

He has attempted to find therapy because his mac and cheese addiction has affected his social life, and he fears it will affect his health. Davis realized that his eating disorder could be caused by PTSD that he suffered from his childhood. His father was abusive physically and mentally, and the Department of Children and Families removed Austin from his parents.

When he was a child, mac and cheese was one of the few soothing things in his chaotic life. Austin is craving that warm, loving feeling he gets from mac and cheese.

Austin has turned to physical activity to work out and lose weight. His new hobby is boxing, and he spars four times a week to “counteract my terrible, awful, carb-filled diet.”

Austin is working with a new therapist to try to ween himself off mac & cheese.

“It’s exciting thinking I could get to a point where I’m able to try new foods and possibly like them and enjoy them,” Austin said. “It’s a stepping stone to being able to do the things I want to do, easier.”

Let’s hope Austin can get the help he needs to eat the foods he wants and is able to shed the trauma from the past.