This Beer Label Drawn By Hunter S. Thompson’s Favorite Cartoonist Is At The Center Of A Lawsuit After Being Banned In North Carolina 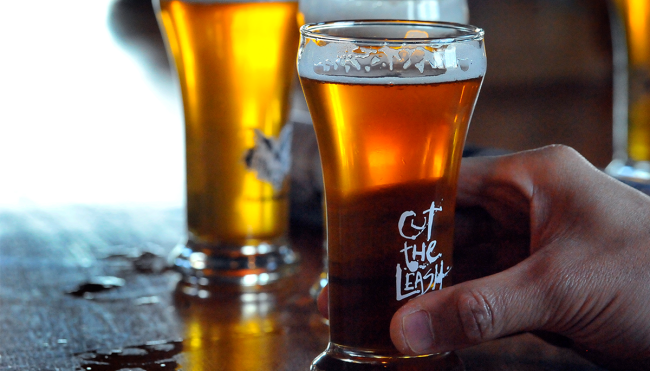 Over the summer, I got the chance to chat with the visionary founder of Oskar Blues Brewery about his contributions to the world of craft beer.

During our conversation, the Dale who lends his name to “Dale’s Pale Ale” credited his countercultural nature for helping him break into the industry but admitted it also got him into trouble every now and then—including the many times he butted heads with the federal agency tasked with approving the label of every single beer sold in America, which didn’t always appreciate the weed references and double entendres he was found of slapping on Oskar Blues cans.

I can’t even imagine how many sternly worded letters that organization has sent to Flying Dog Brewery since it opened its doors in 1990, as the operation that somehow convinced the government to approve a flagship IPA called “Raging Bitch” and an oyster stout dubbed “Pearl Necklace” isn’t really known for exercising much restraint.

It is, however, known for the art that graces its labels, as each of Flying Dog’s beers features a drawing dreamed up by the famed cartoonist Ralph Steadman, who was a frequent patron of the brewery’s original location in Aspen, Colorado along with his longtime partner in crime: Hunter S. Thompson.

Steadman rose to fame thanks to the sketches that accompanied much of the legendary writer’s work. However, as Thompson noted in his legendary essay recapping the duo’s trip to the Kentucky Derby, not everyone was a fan of the grotesque characters the godfather of gonzo journalism described as “foul renderings”—and it looks like Steadman can now add a new entry to his list of critics thanks to regulators in North Carolina.

According to Fox8, Flying Dog has filed a lawsuit against the state’s Alcohol Beverage Control Commission accusing it of violating its First Amendment rights after it informed the brewery it would not approve the proposed label for Freezin’ Season Winter Ale, saying Steadman’s drawing of a naked man standing next to a fire is in “bad taste.”

I would assume officials took exception to the tiny piece of anatomy you can see between the guy’s legs if you squint hard enough, but when you consider those in the 23 other states that have already given the label the green-light didn’t seem to have an issue with it, this seems like a bit of an overreaction.

With that said, I’m sure Flying Dog will be more than happy to pay the required legal fees in exchange for the free publicity they’re getting as a result.