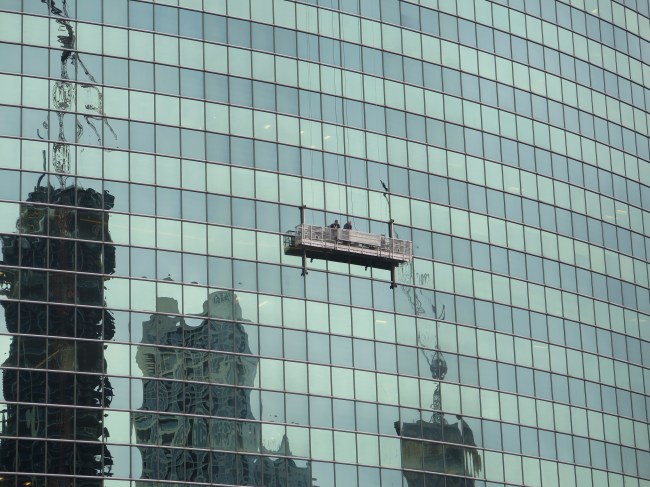 An incident in Oklahoma confirmed all my fears when seeing window washers in those harness baskets a billion feet in the air.

Two window washers were trapped for nearly an hour, dangling back and forth sporadically from the Devon Tower in Oklahoma City, a 50-story skyscraper and the 49th tallest building in the United States.

Oklahoma City authorities received a call around 8 a.m. after onlookers noticed that high winds had caused the rig to dangle off the side of the 850-foot building and bounce around like a wind chime.

“A large basket, believed to have window washers inside, is swinging wildly out of control at the top of the tower. This is a very dangerous situation. Please avoid the area,” the fire department tweeted moments are receiving the call.

The rig even shattered windows as it pinballed back and forth, and left the two workers in it gripping the railing for dear life.

Peep this footage and try not to get a panic attack.

TAC 8: This was the scene moments ago. The basket is now secured and firefighters are working to get the two window washers out of the basket. Injuries unknown at this point. BF pic.twitter.com/exeFsXCkuV

UPDATE | Technical Rescue – Devon Tower | Here is video of the out of control basket as firefighters attempt to control the device. DM pic.twitter.com/IzT65CaHnA

Happening right now in #OklahomaCity window washer rig came loose- wind is blowing them all over including into the building…. knocked out glass windows already
Following @WOODTV pic.twitter.com/gtOzJzDxV7

When your license gets suspended for Uber/Lyft and you take a job as a window washer pic.twitter.com/sUA4YqoeZt

Firefighters managed to secure the basket with ropes to stop the swinging, and brought it back down to the roof to safety. The two contractors reportedly refused medical attention when they got down to ground level.

I can’t imagine what was going through those dudes’ minds as they swung violently 800 feet in the air. I need them to tell their story.