This Tiny, Yet Genius Clue Foreshadows One Of The Biggest Surprises In ‘Game Of Thrones’ 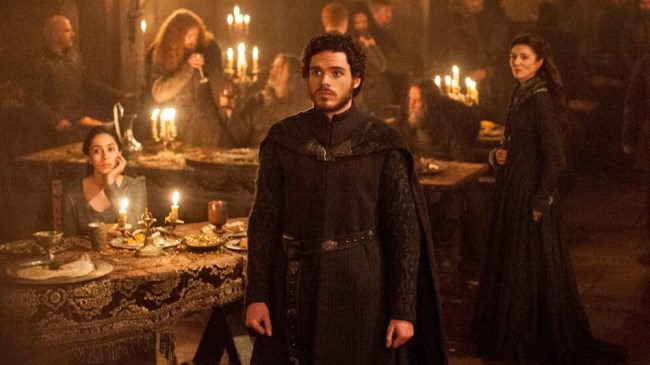 SPOILERS AHEAD!!! A tiny detail foreshadowed one of the biggest surprises in Game of Thrones. A seemingly insignificant and throw-away verbiage signaled a major plot twist in George R.R. Martin’s third book of the A Song of Ice and Fire series titled A Storm of Swords. In the last sentence of a chapter, there is a tiny, yet gigantic clue as to what’s to come regarding the Red Wedding.

An eagle-eyed Redditor named zlow821 noticed one word that spelled disaster for the Stark family. In a conversation between Sandor Clegane, a.k.a. The Hound and Arya. The unusual travel partners are discussing if Robb Stark will allow The Hound to join his army. When Arya says her brother would never let Sandor to join his army, he retorts, “Then I’ll take as much gold as I can carry, laugh in his face, and ride off. If he doesn’t take me, he’d be wise to kill me, but he won’t. Too much his father’s son, from what I hear. Fine with me. Either way I win. And so do you, she-wolf. So stop whimpering and snapping at me, I’m sick of it. Keep your mouth shut and do as I tell you, and maybe we’ll even be in time for your uncle’s bloody wedding.”

[EVERYTHING] GRRM is super clever: Sandor’s crass wording at the end of this chapter also foreshadows the Red Wedding from gameofthrones

You know George had a big-ass grin on his face as he wrote that final line because he loves killing characters. A bloody wedding indeed. Arya’s uncle, Ser Edmure Tully, had a wedding that no one will soon forget… The Red Wedding. Now we just wait until the end of 2019 when the final season of Game of Thrones triumphantly returns to TV.