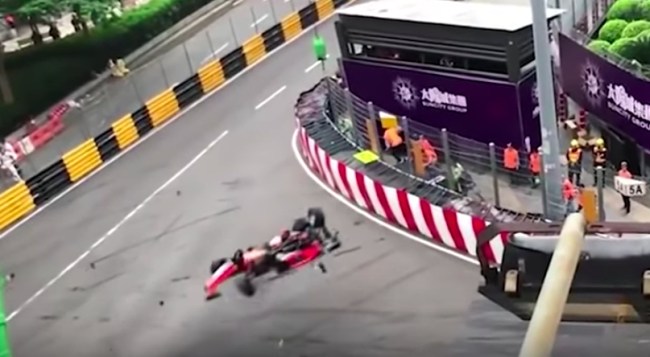 A miracle occurred in at the Macau Grand Prix Formula 3 race this weekend after no one died during one of the most horrific crashes you’ll ever see on a track that’s claimed the lives of eight people since 1973.

17-year-old Formula 3 driver Sophia Floersch escaped with just a spinal injury Sunday when her car went airborne during the road course event after she clipped Japanese driver Sho Tsuboi’s car on lap four. Floersch fractured her spine after losing control of her car at an estimated 170 mph and launching into a photographers’ pit at the side of the track.

Check it out below and try to figure out how no one perished.

Floersch underwent spinal surgery on Sunday, but tweeted THE SAME DAY of the crash that she’ll be okay.

Just wanted to let everybody know that I am fine but will be going into Surgery tomorow morning. Thanks to the @fia and @hwaag_official @MercedesAMGF1 who are taking great care of me.
Thanks to everybody for the Supporting messages.
Update soon.

Frits van Amersfoort, the owner of her team, Van Amersfoort Racing, said she must have had an “angel on her shoulder”.

“It was nearly a rocket. Surviving was incredible,” Van Amersfoort told BBC Radio 5 Live. “We reckon she was traveling at 276kph [171.6mph] at the time.”

“I don’t think I’ve ever seen anything like this. I haven’t seen all accidents in motorsport but this was surely one of the worst I’ve ever seen,” said Van Amersfoort. “We were lucky that she was flying because she went over a barrier. If she had hit the barrier it would have gone a lot worse.”

According to the Guardian, Japanese driver Sho Tsuboi, who Floersch crashed into, was taken to hospital with back pain.

Photographer Minami Hiroyuki was also admitted with concussion while a marshal, Chan Cha In, had a fractured facial bone and lacerations. Another photographer, Chan Weng Wang, had a liver laceration.

All’s well that ends well I guess. My god.