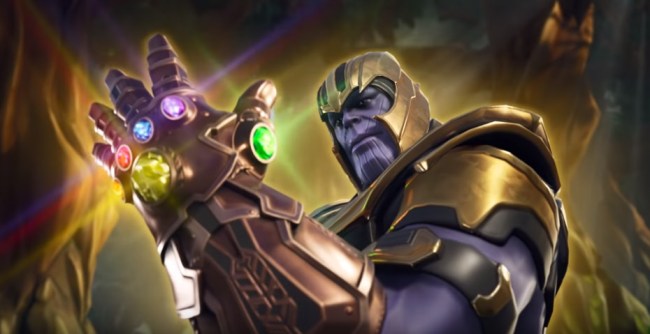 On Monday, we learned the spectacular news that Fornite would get a brand new game mode called Infinity Gauntlet Limited Time Mashup that included Thanos. Today we get all of the details and a peek at how the new Battle Royale mode will work and boy, you need to get your hands on that Gauntlet.

The Infinity Gauntlet Limited Time Mashup is a solo game mode, sorry squads. Somewhere on the Fortnite map lays the powerful Gauntlet with all six Infinity Stones. Early in the match, a meteor will crash in a storm safe zone and deliver the Infinity Gauntlet. If you find the Gauntlet you will transform into Thanos and thus have all of the incredible powers that come with him.

If you are lame enough to get beat while being Thanos (you should probably stop playing Fortnite) the Infinity Gauntlet will fall to the ground and be available for anyone to snatch. If the Gauntlet isn’t taken for long, it will disappear until another meteor appears and plants this incredible weapon back on the map.

Here are all the powers that Thanos has in Fortnite:

Ability 1 – A mighty punch that knocks enemies back and destroys structures.
Ability 2 – Thanos flies towards the ground, hitting an area for knockback and damage.
Ability 3 – Harness the energy of the Power stone to fire a blast that deals damage over time.
Ability 4 – A super-jump that can vault Thanos over all but the largest obstructions.

“Thanos has both shields and health. When he eliminates another player, his shields regenerate. His health never regenerates. Thanos doesn’t take fall damage. Thanos does not build, use weapons or things like launch pads. He has no need for such petty human devices,” Epic Games says. No one man should have all t hat power. All of the other 99 players will know the location of Thanos at all times.

Here's what happens when you transform into Thanos… #Fortnite pic.twitter.com/Is06Ky5ZFB

The Thanos crossover is incredible, but don’t expect any more Infinity War characters coming to Fortnite. Epic Games said there will not be any Avengers skins coming to Battle Royale.