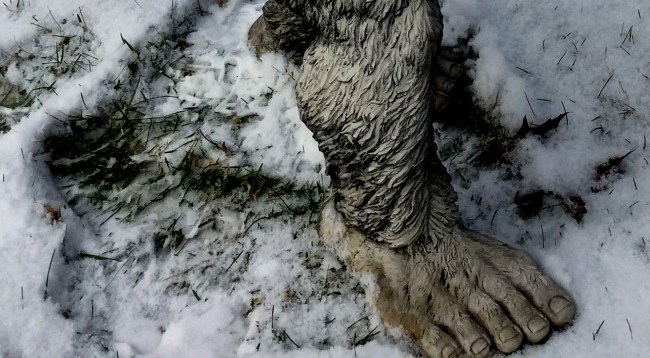 Littleton, population 674 as of the last census, is located near the northern border of North Carolina just a few miles from the Virginia border. (What is going on in North Carolina these days?)

It is also the location of not one or two, but FOUR recent Bigfoot sightings.

Littleton is a minor hotbed of Bigfoot sightings. In early November 2019, Eboni Curls reported seeing a short (5-1/2 feet tall) Bigfoot directly behind the Cryptozoology and Paranormal Museum. [Museum owner Stephen] Barcelo says the latest is the fourth recent sighting in Littleton and he believes the creatures are being driven out of the woods by development.

The most recent Bigfoot sighting in and around Littleton happened when a man named Jesse Walker was taking out his trash on March 20th.

Walker, who appears in the video below, shot by Barcelo, who is also the local commissioner, appears to be visibly shaken by his encounter with Sasquatch, which he says took place just 20 minutes prior to the discussion.

In the video, Walker claims that the creature he saw, which he says was Bigfoot, was “real tall” and had “big hands.”

“His fur was real black,” said Walker while describing what he saw. “And it was shaggy… long.”

“It’s real, man,” added Walker, who is either one of the greatest undiscovered actors of his generation or is telling the unvarnished truth.

Two weeks ago, Barcelo went on a Bigfoot expedition in the area at Medoc Mountain State Park and made some interesting discoveries.

So did this man really see a Bigfoot as he and others obviously believe or is this, and the numerous other recent Bigfoot sightings nothing more than a hoax?

Previously…
• Oil Field Worker In Alberta, Canada Captures Bigfoot Sighting On His Dashcam, Investigates Further
• West Virginia Couple Claims To Have Had Three Encounters With Bigfoot, Photographed The Creature
• The Mystery Of Bigfoot Spotted On A Traffic Camera In Washington State Has Been Solved, Maybe
• A Possible Bigfoot Sighting In Ohio Is Going Viral Thanks To HD Footage And Chilling Sounds Captured In The Clip
• Some People Are Claiming This Video Of An Unknown Creature Screaming Is Proof Of Bigfoot, But I Call Shenanigans
• The FBI Released Their Secret File On Bigfoot Which Includes News About A Test Of Hair Attached To Skin