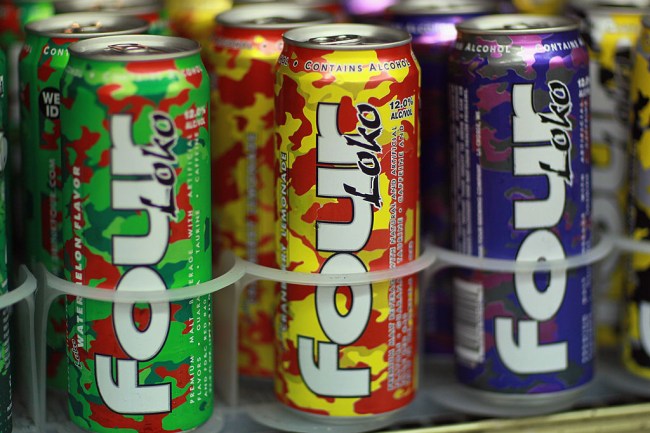 I was immediately on board with Boardwalk Empire when the first episode premiered in September of 2010, and as a college student who was constantly dreaming up new and innovative ways to get my hands on booze, I felt a bit of a connection with Nucky Thompson and his crew as they struggled to gain their footing in Atlantic City in a post-Prohibition world.

A couple of month’s later, the penultimate installment of the show’s first season would air on HBO the Sunday after Thanksgiving but I was unable to catch it when it first ran, as I was a bit preoccupied with something much more important: figuring out how to smuggle two cases of Four Loko back to campus.

I was first introduced to the uber-caffeinated malt beverage when I returned to school for my sophomore year and it quickly became the unofficial drink of the fall semester, serving as the catalyst for countless nights that required a second-hand retelling of the morning after.

I still have a copy of the email that was sent out by my school’s health department ahead of the Halloween festivities that year that dubbed Four Loko a “dangerous concoction,” which was enough to virtually ensure any partier who hadn’t tried it yet would finally take the plunge.

In the weeks that followed, the scrutiny of the drink would only increase, and just before classes let out for the holiday, the bomb dropped: the makers of Four Loko announced they’d be removing caffeine (as well as taurine and guarana) from the ingredient list, meaning anyone who wanted to get buzzed while catching a buzz would be forced to mix their own drink like a heathen.

As a result, I found myself driving into Boston under the cover of night with a duffel bag filled to the brim with oversized cans of the banned drink procured from a liquor store with a lax carding policy, which would go on to fetch a pretty penny on the black market in addition to fueling a few more evenings I couldn’t tell you a single thing about.

People may never be as loco for that Loko as they once were, but if the buzz surrounding the company’s tease of an aggressively boozy hard seltzer is any indication, Jaisen Freeman and Jeff Wright—the men responsible for the hallowed drink—still have a few tricks up their sleeves.

I recently got the chance to talk with the duo, who originally met while attending Ohio State together before joining forces in the mid-2000s in an attempt to escape their corporate jobs after Freeman’s attempt to play professional hockey didn’t pan out as anticipated.

Jaisen: The inspiration was really Red Bull and vodka. All of our friends were drinking them at the time and it was becoming very popular.

There were some other products that were on the market that had these mixtures in it and we wanted to see if we could make something that we would drink and that our friends would drink because we felt like the industry was really stuffy. We thought we could add something to it or disrupt it.

Freeman continued to work at his investment banking gig in Chicago while Wright applied some of the lessons he learned—and took advantage of the connections he made—at an industrial gas company in Houston as the corporation that was dubbed “Phusion Projects” attempted to find its footing.

We talk to a lot of entrepreneurs that come up now and they have an idea and they raise $300 million. Back then, they weren’t just handing out money like that. We had to get a small SBA loan, max out our credit cards, remortgage our house. We had to do everything we could just to make payroll.

It was a different environment back then for startups.

While the two of them had a vision, making it into a reality was easier said than done.

Google searches became one of their most trusted allies as they continued to figure out how to enter the alcohol space, whether it was contracting a company that could whip up a beverage sample or finding the person who would design their trademark camouflage cans.

Wright took point when it came to the most important aspect of their grand design: the drink itself, which required a bit of sorcery when it came to research and development.

Jeff: I hit up a number of flavor houses. You basically tell them what you want it to taste like—the ingredients and the ABV—and they start sending you samples until you find something that’s at least palatable. It was trial by fire.

Jaisen: We would get little samples. They’d send you various iterations and you’d tell them “too sweet” or “too bitter” or “needs less cherry.”

Jeff: Our first flavor was strawberry. It tasted like Robitussin. It was terrible. We were just happy to have something. We were excited to see something on the shelves that we could show to our parents.

It’s worth noting getting the product onto shelves was at times a losing battle, as Freeman recalls they dropped more money to send a pallet of product out than they actually made back in revenue on at least one occasion.

However, the good times eventually started to roll, and after making a name for themselves in the test market of Columbus, Ohio, the word started to spread. By the time 2008 arrived, they realized they might have something special on their hands.

Jeff: Consumers were generating their own videos on YouTube and we were getting texts from our friends like “Dude, did you see that new rap video?” I went on there and I was like “I think we might be onto something.”

Jaisen: This was before things were readily going viral—especially brands. Instagram hadn’t really started yet. MySpace was dead. There was Facebook and YouTube. The power of those tools really helped us. I don’t know if we would have gotten where we are today without them.

If you’re curious, here’s the video in question, which still bangs to this day.

The two of them had sparked a movement that quickly started to gain steam as they hit the mainstream. However, in the immoral words of Dave Matthews, all good things must come to an end, and it was only a matter of time until trouble started to brew.

In 2009, attorney generals across the country launched an investigation into caffeinated alcoholic drinks, which, as Freeman notes, were already subject to regulation.

Jaisen: The government had a limit about the amount of caffeine you could mix with beer and we were in the limit.

This is something that is consumed in every bar and restaurant in the country. It’s been around for hundreds of years—Irish coffee is the original Four Loko. It’s something that’s been commonly used.

When you disrupt the markets like we did, there’s going to be some noise, but we felt like we were covered. We worked with the government agencies before we launched to do everything we could.

A year later, The Great Four Loko Panic of 2010 began. The drink was cited as the catalyst for a number of hospitalizations at colleges around the country and was summarily banned by multiple schools while others sent out warnings to their students about the supposed dangers of the drink.

Things came to a head in November of that year—a whirlwind month that saw the beverage banned in multiple states and yanked from shelves in a number of grocery store chains.

Four Loko (and other companies with similar products) would ultimately receive a letter from the FDA in which the organization threatened to forcibly remove the product from stores much to their chagrin.

Jeff: The product was approved by the federal government and every state in which it was sold. I personally felt like we were a scapegoat considering the FDA didn’t come out and ban caffeine in alcohol. They listed specific products. It was not the combination that was the issue.

Jaisen: We were the scapegoats. We were young. We were naive. We thought people would be happy for us for making something from scratch.

Little did we know that when you get as big as we did and start taking consumers from other brands, people don’t react favorably.

Faced with a decision, the duo decided to give in to the pressure and soon announced they’d be reformulating the drink to remove the caffeine.

Jaisen: We had some options. We could fight it. We could be mad. We could be pissed off. We could pout. It was that or we could move on with our lives.

We had a really big brand that had been built; it was part of pop culture. The consumer was there. So, we took caffeine out, reformulated it, and we ate more than $21 million in inventory and destroyed it all.

So how do you destroy $21 million worth of Four Loko? Wright said it was shipped off to various plants for disposal—at least one of which used it to produce ethanol.

However, Four Loko refused to die.

Jaisen: The rebuilding process was difficult.

We never had an issue with the consumer. They were always there. A lot of competitors were spreading false information that we were going out of business. They had competing products that they were putting into our space.

We had to fight for all of that back. It took four or five years to get back to the levels we were at in 2010.

Today, Four Loko continues to thrive, and while I’m not at liberty to discuss it, Wright and Freeman say they have something special in the works that set to debut in the near future.

Will they ever be able to recapture the magic of O.G. Four Loko? Only time will tell but they’re damn sure going to try.