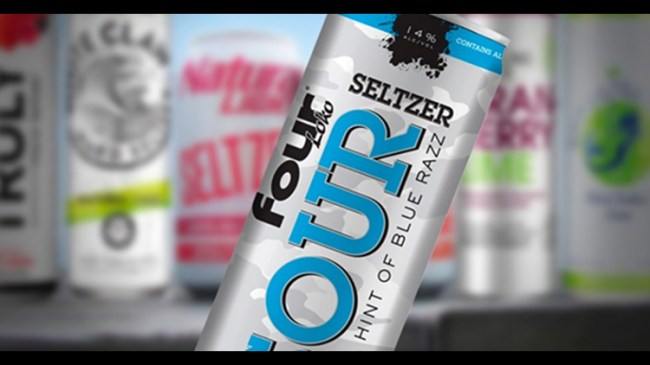 Ever since White Claw unveiled their hard seltzer that was an instant success, other companies have tried to play catch-up by releasing their versions of the massively popular hard seltzer phenomenon. The latest company to enter the ring of hard seltzers is Four Loko, which has a proven track record of pushing the boundaries of beverages.

In recent weeks, there has been new hard seltzer releases lately including PBR’s Stronger Seltzer as well as Natty Light’s hard seltzers appropriately named Aloha Beaches (mango and peach flavor) and the Step Brothers-inspired Catalina Lime Mixer (cherry and lime flavor). Now Four Loko has their own spiked seltzer and it is exactly what you have come to expect from the high-alcohol content malt beverage purveyor.

While White Claw has sold its hard seltzer by marketing the alcoholic drinks to be a “healthier” drinking option with only 2 grams of carbs and 100 calories, while Four Loko has promoted their beverage by proclaiming it to be the “hardest seltzer in the universe.”

Four Loko Sour seltzer has 14% alcohol by volume, which is nearly three times as much alcohol as White Claw. Natty Light’s hard seltzer is 6% ABV and PBR’s is 8% ABV. Four Loko is basically saying: “Our hard seltzer will f*ck you up, but you’ll kind of stay hydrated so you won’t have as much of a death hangover.”

Hard Seltzers ran so we could fly pic.twitter.com/g5ilBIyhl4

Four Loko Sour is flavored “with a hint of blue razz.” Did you know you can make your own hard seltzer by mixing quality alcohol with seltzer or even cut down on the preparation by adding no seltzer at all?

The internet did not disappoint with the Four Loko seltzer jokes.

Me the next day after blacking out because of Four Loko Seltzer pic.twitter.com/GeW89kK65g

Me: “I mean it’s just a spiked seltzer right?”

Me 48 hours later and in Panama: pic.twitter.com/0cV4yhZPRJ