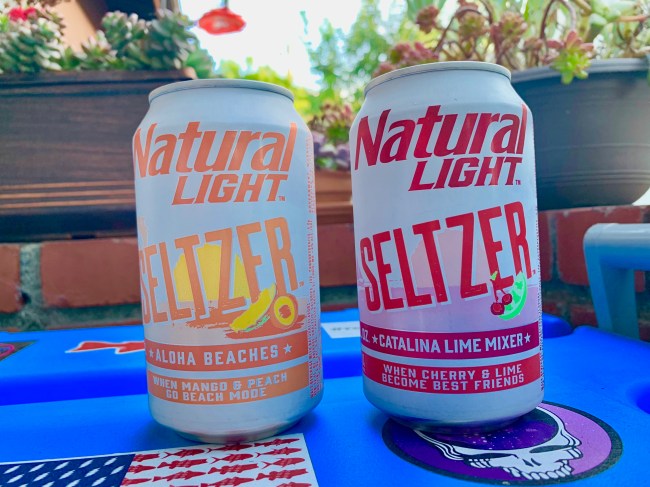 What a wild summer for the hard seltzer segment of the adult beverage industry. $300 million an counting! Whether you love the stuff and just can’t stop guzzling it or can’t stop thinking about a Homer Simpson-esque return to beer this fall, there’s no denying it’s here to stay. Fortunates are being minted from the craze, all feeling like one long rollercoaster since Trevor Wallace’s summer 2019 battlecry that will life in infamy: “Ain’t no laws when you drinking Claws, baby!”

As an imbiber, the hard seltzer trend and Natty Light seltzer is a refreshing change of pace from other glaring booze drinks of the moment. Namely, an increasingly pretentious craft beer scene run by militant, Wilco-loving bearded dudes with dad bods who camp in parking lots for hours on Saturday mornings for an instantly forgettable $20 four-pack of IPA brewed with elderberry, agave, and a rare variety of hops grown in Elon Musk’s Area 69 space lab. Hard seltzer is more refreshing than those beers and less caloric, so you’re not bloated like a whale by the time your favorite band finally hits the stage after an afternoon of tailgating. It’s also less clumsy for those social situations than, say, an Aperol Spritz.

Why I love the IDEA of Natty Light Seltzer:

Look, I got a mailer today from Natty Light that said “DID WE JUST BECOME BEST FRIEND?!”

Step Brothers meets drinking habits. A true melting of worlds. What a time to be alive.

Here’s the wonderful great thing about Natty Light entering the market: There’s finally a hard seltzer option for the proletariat. For the budget-minded having the best days of their lives in or out of college with a Natty Light in their hand.

They key word here is accessible. Natty Light Seltzer is accessible to people who don’t see themselves as seltzer people, especially when it comes to imbibing these sparkling low-cal bevies. The price is right in the sweat spot too: 20% cheaper, according to AB InBev, than White Claw and also sold in 24 packs for the whole crew.

In other words: Value!

So many seltzer brands lean into the lifestyle of being a hard seltzer drinker – That it makes you skinny as less bad for you alternative or it’s a suitable beverage of choice for long summer days on your family yacht listening to Martin Garrix surrounded by skinny people like some Dan Bilzerian pipe dream (newsflash: millennials don’t have yachts, we barely have 401ks). Somehow the marketing messages and storylines about hard seltzer veered into something “aspirational” (a bullshit marketing word that makes me barf) in an era when millennials, now very settled into their late 20s and 30s, think Instagram models, influencers, and those hawking a LIV Miami-style lifestyle are, largely, garish fools and tools.

Natty Light Seltzer? It’s the greasy dinner with a $6 chicken parm that you can’t help but hit up every time you pass it. Other brands are Nantucket, Martha’s Vineyard, or The Hamptons. Natty Light seltzer is Ocean City, Maryland, Dewey Beach, NASCAR races, Stone Cold Steve Austin, Frontier Airlines, and Step Brothers on basic cable — Just in alcoholic beverage form.

Just like Natty was the go-to case to grab in college, Natty Light Seltzer is for the people. 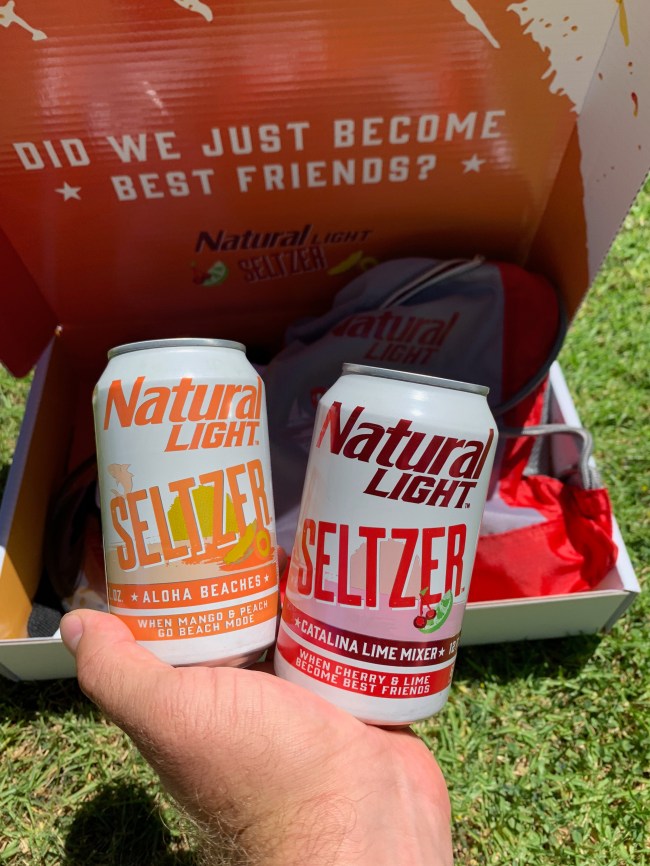 Points for the clever names in my Natty Light Seltzer review. Instant attention-grabber.

Secondly, all seltzer – especially soft seltzer – should be enjoyed ice cold. As a person who always has two 24-packs of LaCroix in the house on standby, I’m talking borderline right before freezing point cold. It just hits the throat with a certain zing and tingle when it’s very close to being a carbonated slushie.

At 6% ABV, Natty Light seltzer probably isn’t going to get slushie form unless you have them in the freezer or an extremely iced down cooler.

Aloha Beaches is a sweet, tangy peach and mango flavor combination. It smells like the candy peach rings you buy at 7-11 for $2 a bag. In fact, Aloha Beaches kinda tastes like those peach rings too. Peach is easily the top note, with the mango much more subtle. The fruity flavors are beachy and tropical; Not in a St. Barths way – More in a Panama City Beach way.

It’s just a tad sweeter than almost all seltzers currently on the market and also has a distinct Natty maltiness that can’t be described. It’s just one of those things that hits the pallet and you know it’s Natty. 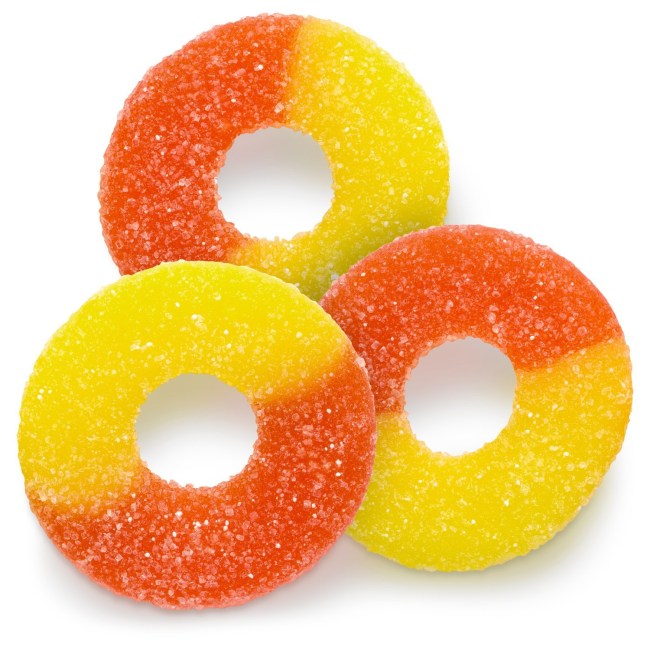 Catalina Lime Mixer is cherry and lime. The smell quickly reminds me of red popsicles. Red, cherry popsicles – The kind you can buy in a huge 36 pack at Walmart for $5. Red freeze pops, red otter pops – you get the gist. That red cherry flavor pops hard here.

The taste, however, is classic cherry lime soda pop. Cherry Lime ICEE!!!! Or cherry limeade, if you grew up drinking such a thing. Ever been to Sonic? Or Buc-cees in Texas? You know the flavor well.

Catalina Lime Mixer tastes like a slightly more tart version of their in-house cherry lime soda. It’s not quite soda, but it’s getting there – It’s still much, much sweeter than other seltzer brands. That said, there’s still a tinge of tart in the mix.

Of course… Any sort of overwhelming cognition about the flavor experience goes away by the time you’re at the bottom of the can.

…And then you just ask you boy Ben to toss you another one.

Bubbles are the key to a great seltzer experience. This is Natty Light Seltzer’s biggest shortcoming, in my experience with both Aloha Beaches and Catalina Lime Mixer. While all the R&D clearly went into a unique flavor profile, it lacks the bubbly carbonated water experience of other seltzers. Comparatively, White Claw, Truly, and the rest mimic the carbonated LaCroix experience pretty well. Natty is noticeably more flat. Kinda like when you take a swig from a fountain soda that’s been in a cup overnight.

A true seltzer savant would call it unbalanced, you could say. I’d just say it’s the endearing Natty Light-ness showing. 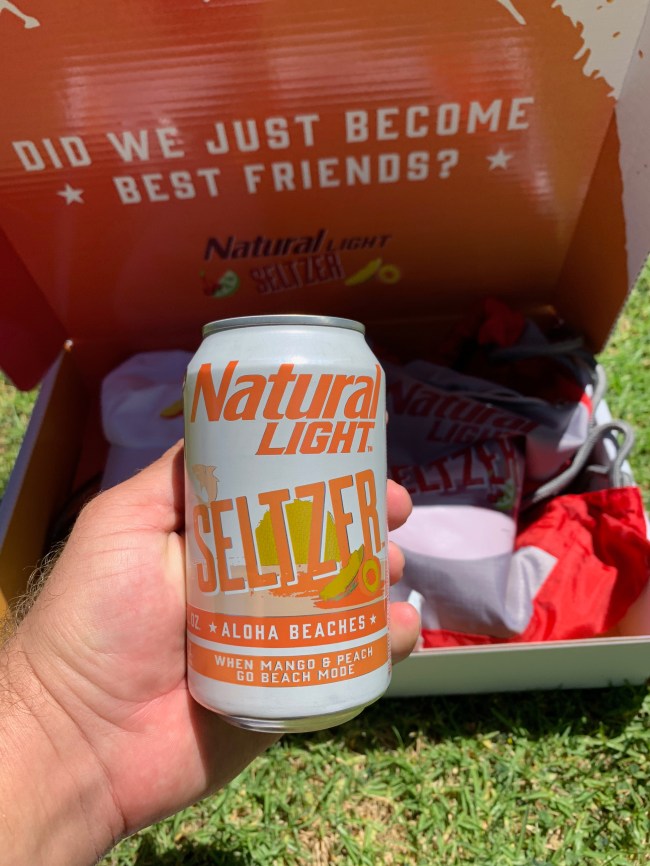 I’ve been blogging about Bro-worthy booze trends for 10 years, since the days of yore with Bros Icing Bros. A “hit” in the alcohol beverage business is 1/3 enjoyable product, 2/3 cultural conditions and target market it gets released to. Natty Light’s strawberry-lemonade Naturdays “beer” was a runaway success, but now it’s probably poised to take a backseat in the marketing cycle to Natty Light Seltzer. Which is just capitalism, baby!

That said, I’m calling it now: Natty Light Seltzer is going to drop a People’s Elbow on the market share of other seltzer brands as 21+ college folk and aging born-to-be-young millennials gravitate towards it. It’s a social hard seltzer, for fun-loving people.

Look for it everywhere adult beverages are sold, along with every college football and NFL tailgate in the country this fall.