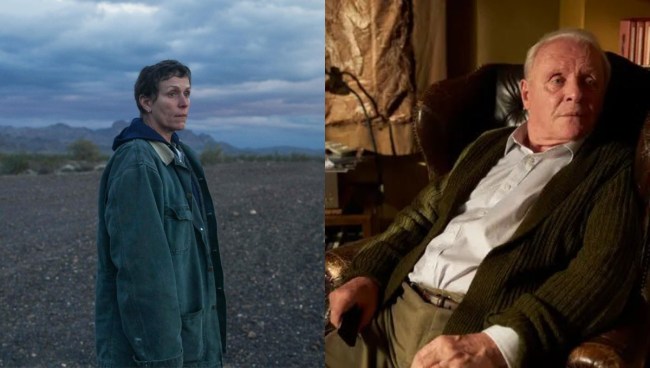 Heading into the final thirty minutes of the Academy Awards, all seemed to be relatively calm. In hindsight, it was the sort of quiet that makes characters in movies wonder if it’s too quiet.

After moving up the award for Best Picture, which is usually the last award given up, up to third-to-last, the Academy decided to end the night with Best Actress and Best Actor.

Prior to the ceremony, Best Actress was perhaps the most wide-open of the acting categories. Daniel Kaluuya and Yuh-Jung Youn, both heavy favorites, won in the Best Supporting categories, and Chadwick Boseman *was* favored to take home Best Actor, with odds close to -1500.

When it came to Best Actress, though, that race was a little more wide-open: Carey Mulligan was favored at +125, with Viola Davis tailing her at +200, and then Frances McDormand at +400 (Andra Day and Vanessa Kirby were also nominated). Had you listened to us over at the Post-Credit Podcast, though, you would’ve seen the McDormand victory coming.

Despite how surprising McDormand’s win was, that shock was immediately upstaged by the Best Actor category, which saw Anthony Hopkins (who closed at about +700) stunningly take home his second Oscar for his work in The Father.

For all the gamblers out there, — which, given that you’ve made it this far in the article, I assume you are — had you parlayed McDormand at +400 and Hopkins at +700, a $100 bet would’ve netted you $3900! While fans of Boseman’s are understandably upset about The Academy’s decision not to award him with a posthumous Oscar, it’s hard to argue against the merit of Hopkins performance, which some are arguing is the best (yes, even better than Hannibal Lecter) of his storied career.