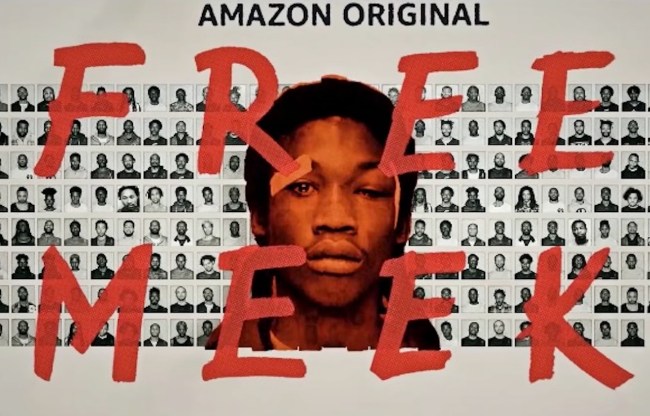 Amazon just dropped the first trailer for Free Meek, the upcoming docuseries about the ongoing legal issues that have plagued Philadelphia rapper Meek Mill for the better part of a decade.

“As soon as Meek was imprisoned, he became a symbol of criminal justice reform,” says one of the talking heads in the trailer for Free Meek, the upcoming Amazon Prime docuseries about Philadelphia rapper Meek Mill.

And that’s exactly what has happened to Meek Mill over the course of the last few years — he’s become more than just a rapper, he’s become a nationally recognized symbol of our country’s need for prison reform.

Produced by Jay-Z (ever heard of him?), Free Meek will delve into the Philadelphia rapper’s complicated legal situation, specifically his 2017 probation violation arrest that resulted in him spending five months in jail.

Lawyers for the Dreams and Nightmares rapper estimate that as a result of his constant legal trouble, Meek has lost “millions” of dollars in profit.

Here’s the official synopsis of Free Meek, via YouTube:

“This explosive docu-series, from Executive Producer Jay-Z, exposes the story of Philadelphia rapper Meek Mill’s 2017 arrest for probation violations. An investigation of his original case explores allegations of police corruption as Meek becomes the face of a powerful justice reform movement.”

Meek Mill, born Robert Rihmeek Williams on May 6, 1987, has been on probation since he was 19-years-old, when he was arrested for illegally possessing a firearm.

Meek Mill, who was sent to prison back in 2017 by Judge Genece Brinkley, was eventually released in April 2018. Since being released from jail, Meek Mill has — in his words — “dedicated himself to justice reform and making sure that the people don’t belong in prison is [sic] not in fucking prison.”

Free Meek, which will consist of five episodes, will be released exclusively on Amazon Prime in the United States on Friday, August 9.