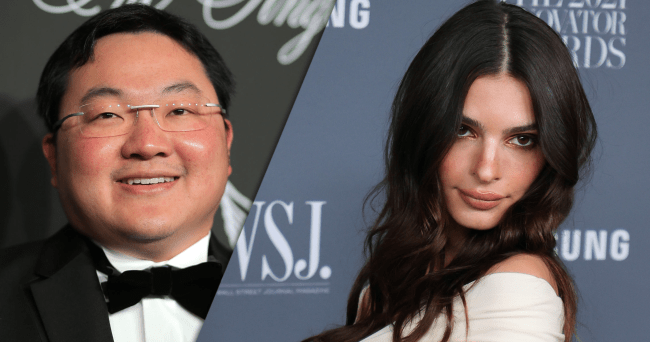 In 2016, billionaire international fugitive Jho Low committed what the United States Department of Justice called the “largest kleptocracy case to date.” Oh, and he once went out with famous model Emily Ratajkowski.

Jho Low allegedly masterminded what is known as the 1Malaysia Development Berhad scandal which involved a government run strategic development company and resulted in former Malaysian prime minister Najib Razak being arrested, convicted, and being sentenced to 12 years in prison for siphoning approximately $700 million into his personal bank accounts.

According to Emily Ratajkowski, who is making the rounds promoting her new book, My Body, Jho Low, who was known to have pursued high-profile women like supermodel Miranda Kerr and Taiwanese singer Elva Hsiao, also pursued her… and succeeded.

“I was on the clock,” Ratajkowski told The Sunday Times.

The Times added that Ratajkowski was “unsure of why she was there, how long she had to stay and who her agent had to check with at the end of the night to find out whether she could leave.”

Leonardo DiCaprio and Paris Hilton attended his parties—but who was Jho Low? https://t.co/ZVSSDOc6MB

Ratajkowski also told The Sunday Times that she was “unaware” of what Jho Low expected of her during the Super Bowl date. She also didn’t specify at which Super Bowl the date took place.

The model also stated in the interview that, based on her experiences, she wasn’t very surprised by the Jeffrey Epstein scandal.

“A lot of my experiences with Coachella, or whatever, the transaction wasn’t defined,” she said. “The terms of agreement weren’t named. I found out later that they invited girls who couldn’t afford food or a nice meal out to these fancy dinners in LA. That was a motivator for them to come. And that’s manipulation.”

Hi @ParisHilton. Malaysians are wondering how much @jho_low spent to party with you? US are seizing his assets #1MDB pic.twitter.com/jwbiRJCf0l

“I witnessed so much of that in different forms. Right before COVID I went to some new nightclub and it was really empty. All of a sudden 10 – I would guess if they weren’t underage then barely of age – models arrive with one guy. I was, like, ‘Oh right, the same thing is still happening. Beautiful girls being out at a club and rich men paying indirectly to have them there.'”