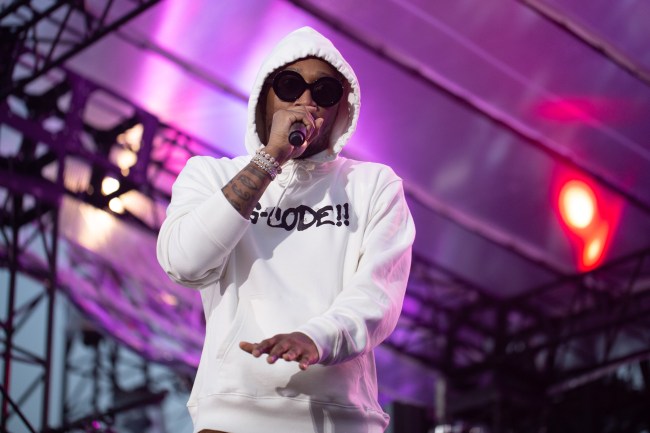 Future’s bodyguard deserves a raise after being knocked out cold with a repulsive sucker punch while walking outside the airport in Ibiza, Spain.

We’re told Future had just arrived and was walking through the terminal when 10 guys approached and asked for a photo. Future said, “Not today, guys,” because he was tired and had just gotten off a long flight.

We’re told the guys then erupted in anger, and began hurling racial slurs and other epithets.

Our sources say Future’s bodyguard stepped in and tried to block the guys and get Future to his ride on the curb.

The sources say the bodyguard actually beat up several of the guys before someone came from behind and sucker punched him. The sources claim the person who struck the bodyguard did so with a rock.

Pro Tip: If you’re going to recklessly assault someone, don’t gloat about it on camera after. Either that or make damn sure it doesn’t go viral. This fuckwad did neither.

I know bodyguards are supposed to protect their clients, but would it kill Future to grow some balls and help shovel him off the pavement? I mean, who needs enemies when you have friends like Future.

Jamaican rapper Safaree Samuels was a bit more concerned for the bodyguard. He wrote on Instagram:

They need to lock these guys up the same way they doing ASAPRocky! This is exactly what I’m talking about with this new generation of camera phone punks! This man had his back turned pushing luggage and got punched for what? That man could’ve hit his head on the floor and died! Then they stomped his head while he was unconscious! These men are traveling the world providing for their families and gotta deal with pieces of shit like this trying ppl because they wanna go viral!! They do everything to protect so called fans but the celebrity is who’s at risk everyday stepping out of the house! These dudes are Pathetic!

After seeing Future body gaurd get knocked out I dont blame Safaree 😭😭😭 this how im coming 😤 pic.twitter.com/mPWNewpqXz