Think You’re Having A Bad Monday? Imagine Being One Of The 560 Parents Who Named Their Baby ‘Khaleesi’ 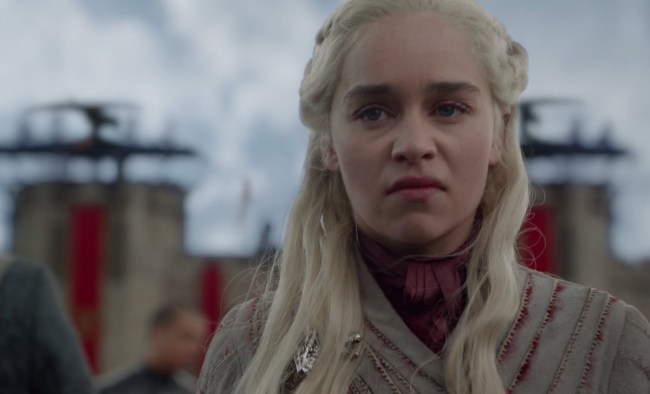 Spoilers ahead. This week’s Game of Thrones showed that Daenerys Targaryen inherited some crazy genes from Aerys II Targaryen AKA The Mad King. Dany went full-blown Mad Queen in “The Bells” episode when she burnt down King’s Landing and committed war crimes by murdering civilians of the capital city of the Seven Kingdoms even after they rang the town bell to surrender the city to Dany.

There are a plethora of people who have been negatively affected by Dany’s murderous rampage — Jon Snow who just realized that he not only caught feelings for his auntie but also dipped his jimmy in crazy, and Tyrion Lannister, who just saw his friend Varys and the people of King’s Landing barbecued alive after he thought he had found the “just ruler” in Dany. Then there are the unfortunate parents who made the overzealous mistake of naming their children after the homicidal Daenerys Targaryen.

Daenerys Targaryen used to be the wholesome leader who loved people and only wanted them to be free. She was such a benevolent Queen and had such positive nicknames such as “the Breaker of Chains,” “Protector of the Seven Kingdoms,” and “the Mother of Dragons.” Now her nickname is the Mad Queen after her maniacal death march.

This downward character arc for Daenerys comes at a bad time for parents who prematurely named their babies “Khaleesi” because they liked Emilia Clarke’s character in the first few seasons of Game of Thrones. They named their daughter after a child-killer before finding out the ending of the TV show that is known to characters change from the protagonist to the villain in a few episodes and vice-versa.

You named your kid after a Targaryen? A Targaryen? Have you not read the A Song of Ice and Fire books? Ser Barristan Selmy summed up Targaryens nicely with this quote:

I am no maester to quote history at you, Your Grace. Swords have been my life, not books. But every child knows that the Targaryens have always danced too close to madness. Your father was not the first. King Jaehaerys once told me that madness and greatness are two sides of the same coin. Every time a new Targaryen is born, he said, the gods toss the coin in the air and the world holds its breath to see how it will land.

Based on 2018 data provided by the Social Security Administration, there are a lot of Game of Thrones characters that are being used for baby names. The most popular baby name inspired by Game of Thrones by far was “Arya,” with 2,545 children taking the name of the Night King assassin. “Arya” was the 119th most popular name for girls in 2018.

The second most popular GoT name was Khaleesi, which sounded great up until this season when she started murdering children like a real psychopath. Khaleesi, which means “queen” in the fictional language of Dothraki, was the 549th most popular name for newborn girls in 2018. There were 560 parents who named their children after the fictional TV character. The name “Daenerys” or “Dany” did not appear in the top 1,000 names for baby girls, but there were eight babies named “Daenerys.”

*Does not include mis-spellings
Source: SSA

After Sunday’s cataclysmic murder spree, one would surmise that the name “Khaleesi” will plummet the same way the name “Adolf” disappeared after the 1940s.

The face of all the parents that named their kid Daenerys, Dany, or Khaleesi #GameofThrones pic.twitter.com/3MOTy0ZFIJ