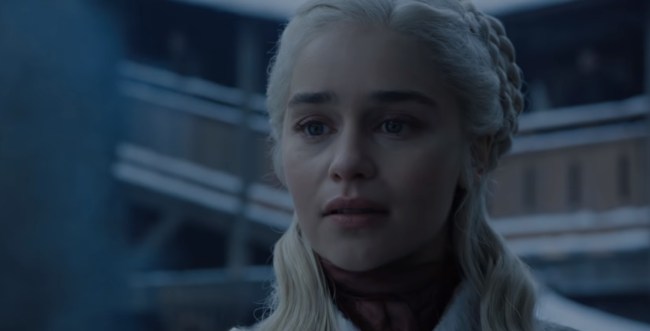 Game of Thrones fans are so very thirsty for the final season that they are analyzing, scrutinizing, and deconstructing every promo photo and trailer. One eagle-eyed Game of Thrones fan claims to have discovered a major Season 8 spoiler that was in one of the recent trailers.

The Season 8 trailer titled “Together” was released last week and it appears to leak a massive spoiler for the final Game of Thrones season.

One very astute fan has already dissected the video down to the last pixel. They have found a huge clue that could hint at disaster for House Stark and their home of Winterfell. In what seems like an innocuous shot (8-second mark of the video) of Daenerys Targaryen (Emilia Clarke) looking at a wall with a fire nearby and Jon Snow (Kit Harington) behind her could be a prediction that the Night King has accomplished a major victory in his military campaign.

Reddit user Spiral66 posted their fan theory to the Game of Thrones reddit Free Folk. The sharp-eyed redditor found that the wall in the trailer is not in Winterfell where Episode 1 is based, but is actually at Dragonstone. They even shared a side-by-side comparison of the very distinct wall of the Dragonstone fireplace.

SHES AT DRAGONSTONE from freefolk

RELATED: ‘Game Of Thrones’ Intro For Final Season Leaks And Shows Winter Is About To Wreak Havoc On The Seven Kingdoms

If this is not a flashback or future vision, this could mean that Jon Snow has lost the Battle of Winterfell to the Army of the Dead and his forces have retreated south to Dragonstone. The dire prediction also could mean that Jon and Daenerys suffered so many casualties in the Battle of Winterfell that they had to flee for their lives and seek shelter at Dragonstone, which is 1,458 miles away from Winterfell. But, there is plenty of dragonglass at Dragonstone so this could be a strategic move since it is one of the few weapons that kills White Walkers.

Season 8 is less than a week away! Game of Thrones returns to HBO on April 14th.

RELATED: Sansa And Arya Stark Prank ‘Game Of Thrones’ Cast By Kissing Each Other During Filming