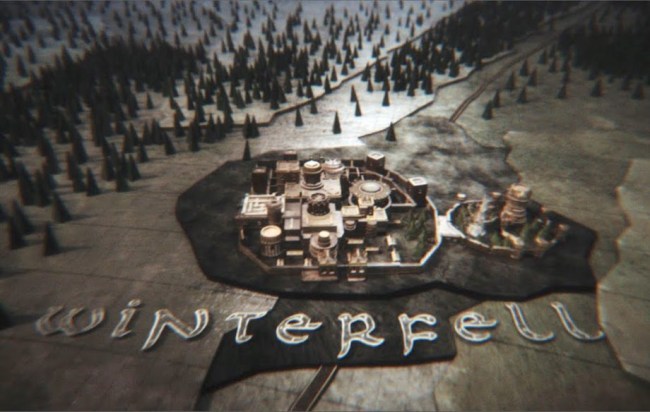 Does the Game of Thrones intro change every episode? It sure does. The Game of Thrones opening sequence features a sun inside an astrolabe that looks like the spheres in the Citadel library and then there is a three-dimensional map of Westeros and sometimes Essos. You’ll see up to six different places on the intro’s map such as Winterfell, King’s Landing, The Wall, Braavos, and Astapor.

You’ll see the sigil of the house that controls each city. The Lannister golden lion above King’s Landing. But that can change due to the storyline, like when the Bolton’s captured Winterfell there was a flayed man sigil over the northern town. Then it returned to a direwolf sigil when House Stark regained control of Winterfell.

The Game of Thrones opening credits gives some foreshadowing as to where each episode will take place. That’s why it was exciting news when the first episode of Season 8 was leaked. During the Game of Thrones final season red carpet premiere in New York City this week, the upcoming intro was leaked.

GoT actress Carice van Houten, who plays Melisandre, shared the Season 8 Episode 1 title sequence on her Instagram, which quickly spread on the internet. Winter is no longer coming, winter is here according to the leaked intro.

The new opening credits also shows that The Wall has been demolished thanks to the Night King and his new zombie ice dragon Viserion and that the map is being consumed by ice as the White Walkers march south.

The city shown in the intro is Last Hearth, which is controlled by House Umber and is the northernmost major castle of the Seven Kingdoms. It is surely the first major city to be consumed by the Army of the Dead.

Want to see an eerily cool Game of Thrones intro? German artist Gilles Augustijnen combined the opening sequences for Game of Thrones with Westworld. The title sequence is titled “Westeros World” and it takes the laboratory aspect of Westworld to create dragons and the Night King from Game of Thrones.

Here’s all the castle opening themes from Seasons 1-7.