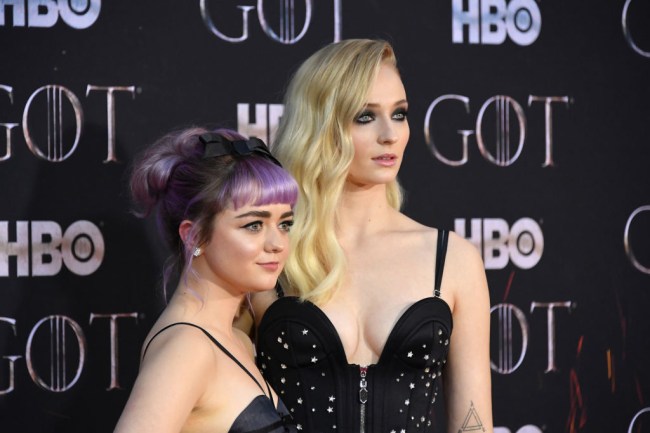 Game of Thrones star Sophie Turner has revealed that she has been with girls before, despite only being 23-years-old and being engaged to Joe Jonas. Now Sansa Stark admits that she kissed Arya Stark to prank her fellow Game of Thrones co-stars.

Despite the Stark sisters being related, the actresses who portrayed them often made out to keep their Game of Thrones co-stars on their toes according to Turner. Having incestuous relationships is not exactly shocking when it comes to the world of Game of Thrones that finds the Lannister siblings having babies together as well as Jon Snow and his aunt Daenerys Targaryen having relations despite sharing a bloodline.

In an interview, the 23-year-old Turner revealed that she would kiss her 21-year-old Game of Thrones co-star. “Even though we play sisters, we tried to sneak a kiss into every scene we did together to freak everyone out a bit,” Turner said. “It kept them on their toes; making sure they were following the script.”

RELATED: ‘Game Of Thrones’ Star Sophie Turner Confirms She’s Been With Girls – ‘I Love A Soul, Not A Gender’

According to Turner, it wasn’t for passion, but rather to keep their fellow actors and actresses on their toes. In a recent Glamour interview, Sophie said it was practically love at first sight when she met Maisie. “Honestly, we’ve been best friends ever since,” Turner said.

Turner met Willians way back in 2009, when they were 12 and 13 respectively. Since then the actresses have gotten matching tattoos. “People always think Maisie and I are a couple,” Turner said. “I mean, I am obsessed with her, so you never know. She’s my drug. I’ve got an addiction to Maisie Williams. I actually stalk her hashtag on Instagram!”

“Sophie knows too much about me to not be my friend,” Maisie said. “Maisie is definitely my protector and I’m hers, too,” Sophie said. “I know if anything happened – especially if it was on Game of Thrones, which it never, ever would – she’d go crazy and protect me… Maisie is my strong home.”

“Everyone on set is sick and tired of us being so loud and laughing so much,” Williams said. “I don’t know if we’ll work together again. I don’t know if people would cast us in something together because we are so known for these two characters. Game Of Thrones will be some of the funniest days of my life.”