‘Game Of Thrones’ Star Sophie Turner Confirms She’s Been With Girls – ‘I Love A Soul, Not A Gender’ 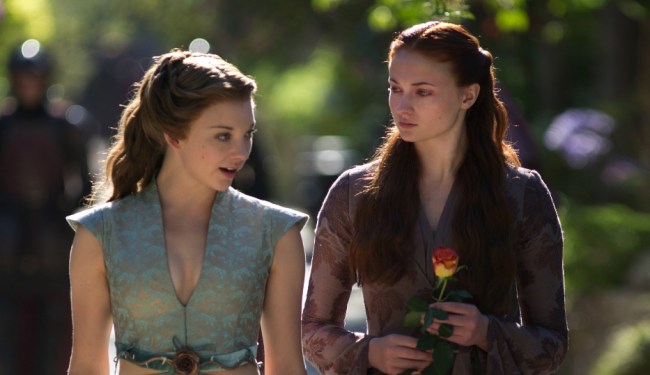 Sophie Turner opened up about her sexuality in a recent interview with Rolling Stone magazine. The Game of Thrones star revealed that she has been with girls in a sexual way in her past. She did not confirm whether she was bi or gay, but said she loves a soul and not a gender.

Turner admitted that she was “fully preparing (herself) to be single for the rest of (her) life.” But she met the right person in Joe Jonas and the two got engaged in October of 2017. “I think once you’ve found the right person, you just know,” the actress who plays Sansa Start said.

“I’ve met enough guys to know — I’ve met enough girls to know.” Turner said. Then Sansa Stark admitted, “Everyone experiments. It’s part of growing up. I love a soul, not a gender.”

Sophie Turner has been close friends with fellow Game of Thrones star Maisie Williams since they auditioned for the TV show in 2010. The two actresses said they had “chemistry” from the first time they auditioned together.

Since then, the two have grown up together and become even closer. They even getting matching Game of Thrones tattoos. Sophie and Maisie revealed that they take baths together when they get high.

when sophie turner helped maisie williams to organize her dress at the #GoldenGlobes pic.twitter.com/NvNnnHfnKv

RELATED: ‘Game of Thrones’ Season 8 Has ‘More Death Than All the Years Before’ Says Sophie Turner

can you believe sophie turner and maisie williams invented being in love pic.twitter.com/qD42yhfhOs

However, Sophie’s most recent co-star that she adores is Tye Sheridan, who plays Cyclops in X-Men: Dark Phoenix. Turner, who plays Jean Grey, joked about her relationship with Sheridan. “I mean, we’re in love.” Sheridan added, “I’m in love with Soph.” Turner responded, “And I’m completely in love with him. [Joe] knows, he’s fine with it.”

RELATED: Sophie Turner Got A New Tattoo And ‘GOT’ Fans Think It’s Some Kind Of Season 8 Spoiler

“We’re like, such good friends, and I’ve always said to Tye, he’s my best onscreen boyfriend I’ve ever had,” Turner said. “And it’s just so nice to have such a wonderful relationship with someone that you’re sharing such intimate scenes with. It’s really important to have that connection.” Be careful Joe Jonas.

Game of Thrones returns on April 14.

RELATED: Sophie Turner Reveals That The Ending Of ‘Game Of Thrones’ Will Be ‘Disappointing’ To Many