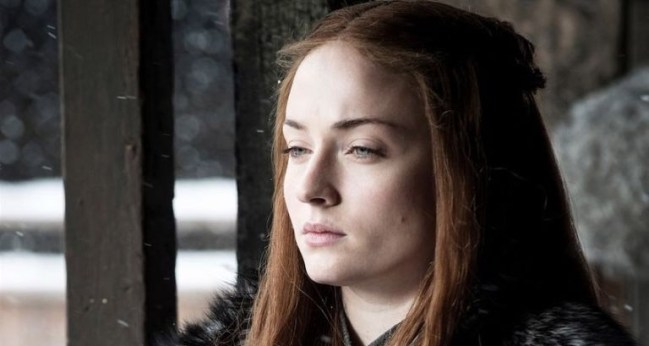 Our favorite connoisseur and reviewer of sausage and very rich person, Sophie Turner got herself a new Game of Thrones-themed tattoo this past week and fans of the show really want to believe that it might be a spoiler for season eight.

Turner’s latest ink is of a direwolf – the House Stark’s sigil – with a quote underneath that reads, “The pack survives.” Cryptic, much?

The quote comes from a speech in George R.R. Martin’s first Game of Thrones book in which Sansa Stark’s father Ned gave Arya (her sister) and says, “In the winter, we must protect ourselves – look after one another. Sansa is your sister. When the snows fall and the white winds blow, the lone wolf dies, but the pack survives.”

Naturally, because everyone is growing very impatient and annoyed waiting for season eight to premiere they are chomping at the bit with all sorts of theories in relation to Turner’s new tattoo.

I lost count of the number of people who commented asking, “Is that a spoiler?” And some even took it further than that.

One person commented, “That’s a spoiler, I think it means all the rest of the Starks will survive.”

Another opined, “She has the baby (got preggo on boat ride) giving birth kills her and baby survives. But the queen does not live on.”

“She survives! Shut your pieholes you haters!” wrote another.

Regardless of what her tattoo means, if anything, we still have to wait until 2019 to find out.

In the mean time, we can help make the wait more painless by keeping up on Sophie’s sausage reviews and checking her out in X-Men: Dark Phoenix, I suppose.

A post shared by Passionate Bout The Saus (@sophiessausagereviews)