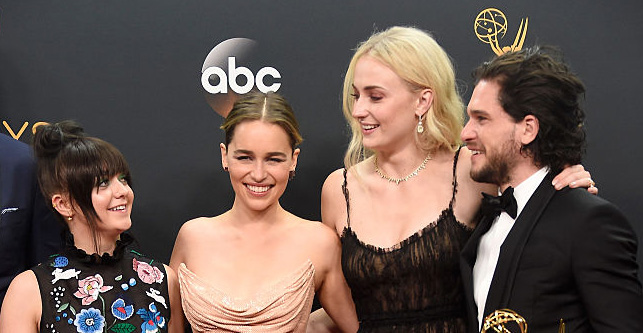 It’s coming. Can you feel it? The final season of Game of Thrones is, well, it’s not even close to being here yet. That doesn’t mean they haven’t been working really hard on it though. In fact, Emilia Clarke has filmed Daenerys’ final scene on Game of Thrones and she says it really messed her up (only not in those words).

In a recent interview with Vanity Fair, the 31-year-old actress revealed that somehow after years of wild stuff like beheadings, nudity, sex, and over 170,000 deaths, it was her final Thrones scene that really shocked her.

“It fucked me up,” she says. “Knowing that is going to be a lasting flavor in someone’s mouth of what Daenerys is…”

Kit Harington, one of Clarke’s best friends off the set, also explained to Vanity Fair was it like doing that scene.

“If you’ve known someone for six years, and they’re best friends with your girlfriend, and you’re best friends with them,” said Harington, “there is something unnatural and strange about doing a love scene. We’ll end up kissing and then we’re just pissing ourselves with laughter because it’s so ridiculous.”

As for the rest of the final season, Clarke says, “I’m doing all this weird shit,” Clarke says. “You’ll know what I mean when you see it.”

Speaking of final seasons, Clarke revealed just how big the wrap party plans are for Game Of Thrones to Irish website JOE.

“Like it’s the only thing we talk about on set,” said Clarke.

Just guessing, but I am bet it will look a little something like this…

She also explained that after 10 years they aren’t having just one wrap party, but several.

“I plan on partying my way through the end of Game of Thrones,” said Clarke.

Then, when she’s all done, she can finally pursue her real dream of re-creating stock photos. (She’s very good at it.)