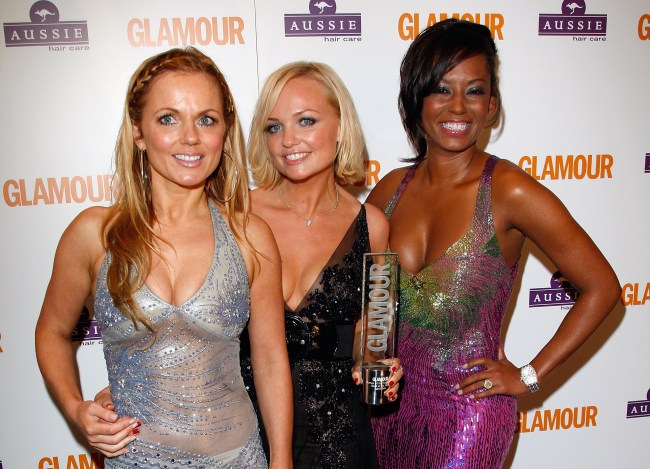 Mel B revealed that she slept with her Spice Girls bandmate Geri Halliwell. I didn’t know that the Spice Girls had gotten back together and were having a reunion tour this summer, but as soon as I saw this titillating entertainment story, I knew that this revelation was made to drum up publicity for their upcoming tour. I guess I fell for it.

While appearing on the Piers Morgan’s new TV show Life Stories, Scary Spice Mel B confessed that she had sex with Ginger Spice. “You were coming here to be brutally honest,” Morgan said and then asked her, “Did or didn’t you sleep with Geri Halliwell?”

‘The race is on to get out of the bottom.’ Who do think you are? #thebrits 🇬🇧

Scary Spice was shy at first, but then admitted that she “slept in a bed together, but not like that.” Then Mel B made the revelation. “She’s going to hate me for this because she’s all posh in her country house with her husband,” the 43-year-old America’s Got Talent host said. “But it wasn’t a ‘thing,’ it just happened, we just giggled at it and that was it. We were best friends. It just happened.”

EXCLUSIVE: In @piersmorgan’s Life Stories, Mel B revealed she slept with bandmate Geri Horner in the mid-nineties. pic.twitter.com/PQoAXlt9uE

Not sure how Geri Halliwell likes her private sex life exposed to the world by her fellow bandmate since she married Red Bull Formula 1 boss Christian Horner in 2015 and has two kids.

However, Scary Spice apparently didn’t do it for Ginger Spice. In a 2003 interview with Howard Stern, Halliwell admitted to “having lesbian sex once” with a bandmate and that she could “never say who it was.”

“I realized pretty quickly I was not a lesbian. I don’t mind boobs but the other bit is not my cup of tea. I didn’t like the lesbian thing. It is part of experimenting. I was drunk at the time,” Ginger Spice said.

Mel B also revealed that she also kissed Mel C AKA Sporty Spice, but elaborated that it was “nothing sexual.” The kissing was only to show off and test out a new tongue piercing. Of course, that’s what friends are for.

Melanie Janine Brown is openly bisexual and she had an open relationship with her then-husband Stephen Belafonte. The couple engaged in threesomes, but some jealousy caused a rift in their marriage. Brown filed for divorce from Belafonte in March 2017. She accused him of “emotional and physical abuse.” There were also reports that Belafonte had sex and impregnated the couple’s nanny Lorraine Gilles.

Getting it done,workouts and eating right makes all the difference,even if I have to workout at 430am before I wake my kids up for school😩sorry @donaldromain for the super early starts,but come on oh my it’s worth it,it feels good when you can feel on the inside changes and you can see on the outside results happening,so I’m getting there,I’m not far off this picture that @itstroyjensen took of me a few years ago,this is MY inspiration,ME haha that’s right a picture of myself nobody else😜why? Why not,if you don’t start with loving respecting and believing your self your never gonna be happy with yourself,it’s that simple,your always gonna need somthing or someone else to complete you,so give yourself yourself and start from the inside out and learn to love yourself unconditionally with respect love and loyalty,and dedicate time to looking after YOU,then and only then are you living your best life,ahhhhhh,see then everything and I mean EVERYTHING and anything is possible #getready #patience #knowledge #2019 #stopabuse #brutallyhonest #livingmybestlife #workhardplayhard #womensupportwomen