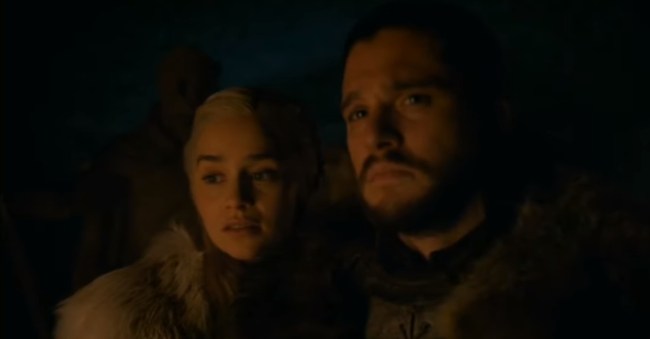 In Episode 2 of Season 8, everyone lived as though it was their last night alive in Westeros. With the impending Battle of Winterfell set to happen in the next episode of Game of Thrones, Tormund was shooting his shot, Arya swished her shot with Gendry, and Jon Snow was explaining to his girlfriend that she’s his aunt. There will be many characters who will die in Episode 3 for sure, but the song featured in this week’s “A Knight of the Seven Kingdoms” episode could give clues on the future of Jon and Daenerys.

Game of Thrones has used music to help tell the story to hint at plot points and each house has their very own theme music. There was the unforgettable “The Rains of Castamere” played at the Red Wedding and “The Bear and the Maiden Fair” for Jaime Lannister and Ser Brienne of Tarth. Another important song could be Jenny’s Song, which was sung by Podrick while everyone was trying to ease their nerves with wine to deal with the impending doom and death from the Night King and his Army of the Dead.

RELATED: What Is The ‘Showstopper’ Weapon That Gendry Is Making For Arya And Is The Night King On Her Kill List?

Game of Thrones showrunners David Benioff and D.B. Weiss personally selected Florence to sing that song. “The opportunity to hear her otherworldly voice on our show was always at the forefront of our minds,” Benioff and Weiss said in a statement. “We’re still pleasantly shocked that she agreed to sing ‘Jenny of Oldstones,’ and we’re in love with the result.”

Singer Florence Welch was excited to be part of the hit TV show. “When I first heard the song it sounded like a Celtic lullaby to me,” says Florence. “Celtic music has always been in my blood, so I felt like I could do something with it. The magic and ritual in Game of Thrones, not to mention the costumes, have always appealed to me. I am honored to be a part of the final season.”

Here is the lyrics to Jenny’s Song:

The lyrics were on point for this episode because of the mention of “high in the halls of the kings who are gone” filled with “ghosts” and “damp, cold stones,” which sounds exactly like the Crypts of Winterfell.

Jenny’s Song was in George R.R. Martin’s A Song of Ice and Fire novels and titled Jenny of Oldstones. The song is based on a Westerosi tale from many generations ago and was first seen in A Storm of Swords.

King Aegon V Targaryen’s firstborn son Prince Duncan Targaryen fell in love with a “strange, lovely, and mysterious” commoner named Jenny of Oldstones. However, the Prince was already betrothed to the daughter of Lord Lyonel Baratheon in what was a political alliance. Duncan, who coincidentally is one of the few Targaryens who has dark hair instead of the distinctive platinum blonde hair just like Jon Snow, was next in line to sit on the Iron Throne, but he cast aside thr crown to be with his true love.

King Aegon allowed Prince Duncan to marry Jenny from Oldstones, but made his son Jaehaerys next in line for the Iron Throne. After abdicating the throne, Duncan became known as “the Prince of Dragonflies.” “Lord Lyonel Baratheon was so enraged by the shame and dishonor brought to House Baratheon that he renounced his fealty to the Iron Throne and declared himself Storm King” and “a short, bloody rebellion followed, which only ended when Ser Duncan the Tall of the Kingsguard defeated Lord Lyonel in single combat.”

Jenny of Oldstones was eventually accepted by the royalty and became “Lady Jenny.” She brought a woods witch who was possibly a Child of the Forest with her to court. This is the person who is responsible for The Prince that was Promised AKA the Azor Ahai prophecy. The woods witch also successfully predicted the Red and Purple weddings, so take what she says seriously.

RELATED: ‘Game Of Thrones ‘ Fan Theory Says Fiery Death In Season 8’s Premiere Gave A Clue On How To Defeat The Night King

Once Duncan’s younger brother King Jaehearys II heard the prophecy, he made his son Aerys (later the Mad King) and daughter Rhaella marry so they could fulfill the prophecy. Aerys and Rhaella had four children Shaena, Viserys, Rhaegar (Jon’s father), and Daenerys Targaryen. Duncan and Jenny died when their was a mysterious dragon-summoning fire at their Summerhall home.

There is a Game of Thrones fan theory that said Rhaegar wrote the song and would like to sing it. Daenerys made it a point to say that Rhaegar “liked to sing” when talking to Jon in the Crypts.

In this week’s episode, Jon finally told Daenerys that they’re not only related, but he is Aegon Targaryen, the trueborn son of Rhaegar Targaryen and Lyanna Stark. Instead of getting nauseous from the fact that she slept with her nephew, Dany was more concerned that she’s not entitled to sitting on the Iron Throne. “If it were true, it would make you the last male heir of House Targaryen,” Daenerys said. “You’d have a claim to the Iron Throne.”

The beautifully mournful song is about having to make a choice about love or power. So once again the line “the things I do for love” comes into play for another GoT character.

Could Jenny’s Song foreshadow how Jon and Dany will end up? Dany already told Jon that they “could stay a thousand years” at the waterfall in episode 801, but will not having her Iron Throne ruin the relationship? Could Daenerys or Jon or both of them be the Prince That Was Promised or is their child Azor Ahai? But will they even live through the Battle of Winterfell to deal with these dynamics afterward?