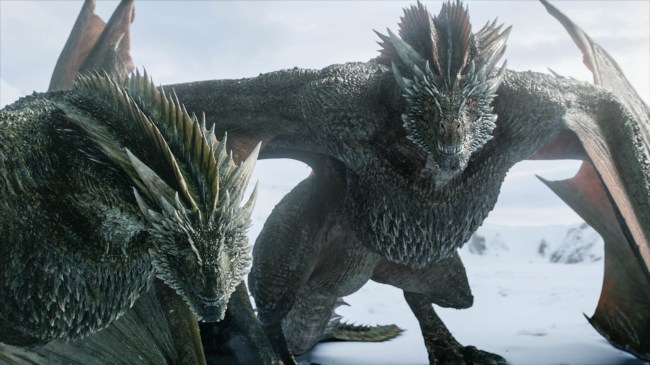 A deleted scene from the Season 8 premiere of Game of Thrones gives credence to a widely popular theory about Jon Snow (Kit Harington) and his parentage. We’ve known that Jon Snow is not the person who Ned Stark (Sean Bean) said he was for a long time now. The “next time I see you we’ll talk about your mother” moment never happened because Ned lost his head.

Finally, in the Season 8 premiere, Jon Snow learned about his mother and his father. And just as Ned said, “the next time I see you, we’ll talk about your mother.” While Ned wasn’t alive, Jon Snow was in the Crypts of Winterfell for the first time since Season 1 and with Eddard Stark’s statue. That is where Samwell Tarly (John Bradle) told Jon Snow that he is the son of Rhaegar Targaryen and Ned’s sister Lyanna Stark. Jon is dumbfounded since he realizes that he has the hots for his aunt. Sam adds that Bran Stark (Isaac Hempstead-Wright) AKA the Three-Eyed Raven also knows that Jon is a Targaryen and rightful heir of the Iron Throne.

RELATED: What Do These Terrifying Spiral Symbols In ‘Game Of Thrones’ Mean, What’s The Origins And Are The Targaryens Involved?

This goes back to the R+L=J fan theory that has been around for years now that says Jon Snow is actually Aegon Targaryen.

Now a deleted scene from Episode 1 of Season 8 really hammers home the fact that Jon Snow is a true Targaryen. The King of the North was with Daenerys Targaryen and she told him to ride one of her dragons. Rheagal, named after Rhaegar Targaryen, was happy to let Jon Snow jump on his back for a wild ride. However, the deleted scene really proved how much of a Targaryen that Jon Snow really is.

During the scene, Jon turns to Danerys and says, “You’ve completely ruined horses for me.” However, in this deleted scene, Jon Snow has another line of dialogue that is extremely telling. In the behind-the-scenes footage, Jon Snow says, “It almost seemed like he knew where I wanted to go.”

Dragons are said to have a special connection with only Targaryens and that is why they are the only ones who ride the magical beasts. In the video, Game Of Thrones showrunner David Benioff gives more relevance to Jon’s one line and says, “Only Targaryens can ride dragons, and that should be a sign for Jon. It’s a major thing for her when she sees they have some kind of connection to him. They allow him to be around them.”

Co-creator Dan Weiss then says, “Seeing Jon and Danny on the dragons together – it’s a Jon and Dany moment, but it also seeds in the idea that these creatures will accept Jon Snow as one of their riders.” So Targaryens have a special bond with their dragons and they control them with their minds.

At the 14:45-mark, Kit Harington talks about riding the robot dragon prop and getting his nuts caught and thinking this is how he is going to die.