What Do These Terrifying Spiral Symbols In ‘Game Of Thrones’ Mean, What’s The Origins And Are The Targaryens Involved? You know the deal, spoilers are coming. In the Season 8 premiere of Game of Thrones, Ned Umber left Winterfell to bring the fine folks from Last Hearth away from the incoming invasion of the Army of the Dead. Sadly, little Ned was too late. Last Hearth, which is the closest castle to The Wall, was already sacked by the Night King. Ned Umber was not only killed, but also hung up on a wall and dead people body parts were assembled around him in a very particular design. Near the end of the “Winterfell” episode, Tormund Giantsbane, Beric Dondarrion and Eddison Tollett discovered Ned Umber’s body. But it was too late, the head of House Umber had already turned into a wight. Dondarrian was forced to burn little zombie Ned with his flaming sword to stop him from attacking the group. “It’s a message from the Night King,” Beric says. The Night King apparently knew that Ned Umber was the leader of Last Hearth and decided to make him the poster boy for the White Walker’s southern-moving military campaign.

The fire illuminates the very specific spiral symbol that we have seen in Game of Thrones before. In Season 3, Episode 3 titled “Walk of Punishment,” Jon Snow, Mance Rayder, Tormund and Ygritte find dead horses beyond the wall and the animals’ mutilated body parts organized in the shape of a spiral. “Always the artists,” Mance says before the shot of the mangled horses meaning that he has seen this distinct symbol many times before.

But it isn’t just the White Walkers who are using this very specific spiral symbol. In Episode 5 of Season 6 titled “The Door,” Bran goes back in time in a vision and watches the Children of the Forest create the Night King from an ordinary man by stabbing him in the heart with dragonglass. Bran’s vision also shows a weirwood tree with stones positioned in the same seven-spoked spiral. The Children of the Forest found some mystical value in this swirl symbol and used it in their magical rituals. 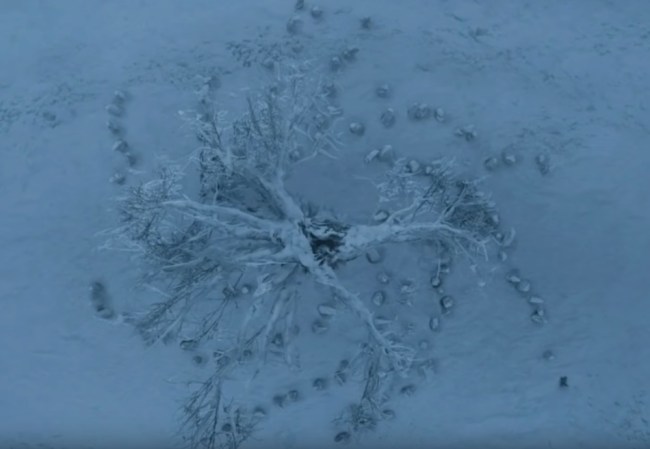 Jon Snow discovered the same spinning counterclockwise spiral symbol carved in caves beneath Dragonstone, which is the castle where House Targaryen ruled. The ancient cave carvings tell the story of how the Children of the Forest made an alliance with the First Men to defeat the White Walkers and the Night King. “They fought together against their common enemy,” Jon explained to Daenerys Targaryen. “Despite their differences, despite their suspicions. Together. We need to do the same if we’re gonna survive. Because the enemy is real. It’s always been real.” The First Men settled in Westeros between 8,000 and 12,000 years ago.

RELATED: ‘Game Of Thrones’ Fan Theory Says Daenerys Targaryen Will Betray Everyone And Become The Night Queen In Season 8

In August of 2017, Game of Thrones showrunner David Benioff discussed the peculiar symbols. “It’s supposed to be something that’s very evocative of the thousands of years that have passed since these caves were first explored and the paintings were first made. And also obviously something that’s quite relevant to the current storyline because it’s about how these two disparate peoples united to defeat the common enemy,” Benioff explained. “One of the things we learn from these cave paintings is that the White Walkers didn’t come up with those images, they derived them from their creators, the Children of the Forest. These are patterns that have mystical significance for the Children of the Forest. We’re not sure exactly what they signify, but spiral patterns are important in a lot of different cultures in our world, and it makes sense that they would be in this world as well.”

Benioff also talked about the symbols in this Inside the Episode video (2:52-mark) from 2016.

So does the reemergence of this distinct spiral mean the rebirth of the Night King and the White Walkers?

If you look at the White Walker symbol closely, it bears resemblance to the Targaryen sigil, which is a red three-headed dragon that is contorted in a circular way that looks like a spiral. The spiral symbols were found in the island home of the Targaryens, could this be related in some way? Or do the seven spokes have to do with the Faith of the Seven religion?

There are actually numerous geometrical patterns and symbols spread throughout Game of Thrones that have some metaphorical meaning. In the very first scene of the very first Game of Thrones episode, another child was killed and hung on a tree for all to see. There was also a circle pattern with a line in the middle of it formed from dismembered body parts.

Could the symbols be a warning by the White Walkers to warn humans that they are about to encounter deadly and intelligent creatures and not mindless zombie wights. Whatever the meaning of this spiral symbol, it must have significant importance for the spiral to keep showing up on Game of Thrones.

RELATED: Sansa And Arya Stark Prank ‘Game Of Thrones’ Cast By Kissing Each Other During Filming