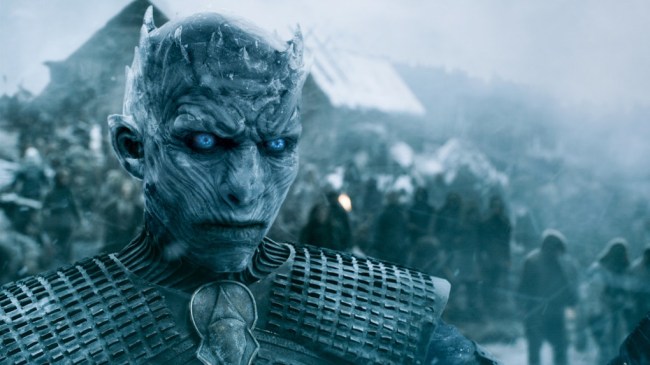 The Night King and his Army of the Dead have breached The Wall and are headed south on a mission of annihilation. Jon Snow has traveled around Westeros to gather his own lethal fighting force that could counter the Night King’s mighty undead military. However, could there be a simple way to defeat the Night King without jeopardizing the lives of thousands of the living? A new Game of Thrones fan theory suggests that there might be a possible way to cripple the Night King.

In the Season 8 premiere of Game of Thrones, we saw the untimely death of Ned Umber, the head of Last Hearth. The White Walkers made the young leader of House Umber into a warning for all others. Umber was murdered, hung on a wall and there were mangled human body parts assembled around his body in the same spiral symbol that the White Walkers have been using since Season 3. Ned Umber the Wight attempts to attack Tormund Giantsbane, but Beric Dondarrion is quick to slay him with his flaming sword. The amputated body parts and the ancient symbol quickly go up in flames and the zombie boy dies.

RELATED: What Do These Terrifying Spiral Symbols In ‘Game Of Thrones’ Mean, What’s The Origins And Are The Targaryens Involved?

“I might have just figured out the ending and how to kill the Night King. GoT is all about foreshadowing… and they just showed Beric Dondarrion put a flaming sword through a wight in the middle of the symbol that represents a Weirwood Tree,” the Redditor explains. “Game of Thrones loves to intricately foreshadow outcomes, but ironically in plain sight.”

“At first thought, I figured they will need to burn the Weirwood tree to which the Night King was bound as the Children of the Forest created him,” the theory continues.

That means that the living will need to burn down the Grand Weirwood tree located near Gods Eye, the largest lake in Westeros located in the southeastern Riverlands. In the middle of the Gods Eye lake is the Isle of Faces, a sacred island. The area is surrounded by Weirwood trees, but most have been cut down and burned in the past.

What the fuck is this spiral pic.twitter.com/lkZP8leRYE

The theory suggests that the Ned Umber death scene has a hidden, but an obvious message that the spiral symbol must be burned. As Umber’s body burned, the fire quickly spread to the other body parts, which is an analogy of the Grand Weirwood burning and everything connected to it dying. In the past, followers of the Lord of the Light look into the flames for answers, could the fiery death of Ned Umber provide a way to kill the Night King?

A Story of Ice And Fire characters even get a special feeling when they are by Weirwood trees because they seem to generate a special feeling, almost a human-like vibe. The Game of Thrones theory says that if the Gran Weirwood tree was burned down then the Night King would lose his powers such as creating White Walkers and raising the dead. Will Jon use Beric’s flaming sword to destroy the Grand Weirwood or jump on his dragon Rhegal and burn the tree to smithereens?

However, destroying the Grand Weirwood would also come with major repercussions. The Children of the Forest also get their powers from the Weirwoods, so they to would probably be powerless or could die. So does the Three-Eyed Raven, which means that Bran Stark would lose all of his magical skills or possibly perish.

The Lord of the Light religion is also heavily dependent on the Weirwood trees, so that could mean the death of the Grand Weirwood could lead to the death of Beric. Jon Snow was brought back to life by Melisandre using the Lord of Light, so that spell could be potentially reversed, killing Aegon Targaryen.

Here is an explainer on the Weirwood trees.

So where are all of the remaining Weirwoods? This video details all of the castles that have a Weirwood tree in their gardens including Winterfell, King’s Landing, HighGarden and Casterly Rock. You can read more Game of Thrones fan theories HERE.

RELATED: ‘Game Of Thrones’ Fan Theory Says Daenerys Targaryen Will Betray Everyone And Become The Night Queen In Season 8