George R.R. Martin Says Final Season Of ‘Game of Thrones’ Was Originally Going To Be A Movie Trilogy 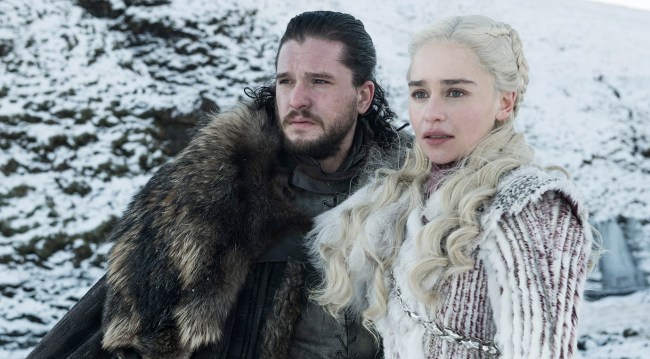 Remember Game of Thrones? You know, that fantasy drama from HBO that largely spent the better part of the past decade redefining what television could be only to crashland in a fiery heap down the stretch? Yeah, that one.

While it may be difficult to remember, there was a time when Game of Thrones was the biggest thing on the planet, as its first six seasons of television were unlike anything the medium had ever previously seen.

In fact, those first seasons were so epic that there was apparently a plan to bring the series’ beyond our televisions and onto the silver screen for its conclusion.

According to George R.R. Martin — the author of A Song of Ice and Fire, the novel series that Game of Thrones is based on — HBO was originally considering releasing the series’ final hours as “three big movies”

Considering just how massive the Game of Thrones branding is around the world, it would make sense for HBO to potentially want the fantasy franchise to have a bit of big screen fun. And while it still could happen in some way, shape or form in the future, George R.R. Martin claims those conversations were initially happening in regards to the show’s highly polarizing final season. Here’s how Martin explained it (and note that the below is a translation from a German publication):

“At the moment it is not my place to decide because the movie rights for Game of Thrones belong to HBO. Besides from that, we actually considered this option: David Benioff and Dan Weiss, the makers behind the TV show, wanted to finish the saga with three big movies after Season 7. Game of Thrones was supposed to end in cinema. It was seriously discussed four to five years ago.” [via CinemaBlend]

Considering what fans were ultimately left with — a haphazard string of episodes that inherently felt rushed — mostly everyone can agree that anything else, even a movie, would have been a better option.

Luckily, fans won’t have to wait long to wash out the sour taste of Game of Thrones with a new Westerosi tale, as the Targaryen-heavy prequel series, House of the Dragon, is set to premiere in 2022.