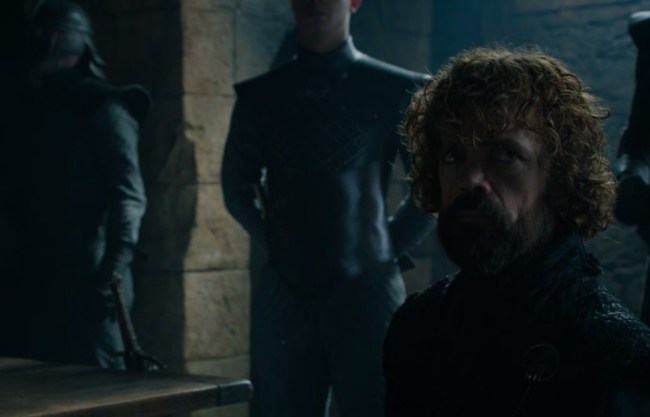 Each week I will set out with a foolishness and a sense of purpose that would make Jon Snow proud by power ranking all of the plot lines in the most recent episode of ‘Game of Thrones.’

Here’s something you should know about me: I have little to no interest in being part of a battle. However, after watching last night’s episode of Game of Thrones, the idea of being involved in the night before a battle is one I could get down with.

Hanging out around a fire and telling random stories? Yes please. Having conversations with random people in random places? Let’s do it. Engaging in some good ol’ last night on earth sexual relations? Giddy up.

With that being said, here’s our song of the week.

Things are a little wonky this week because the entire episode takes place in the North and plot lines are zig-zagging and intersecting all over the place. So while this will still be a ranking of plot lines, some might be either more micro or macro than others. Think big picture and little picture but with some convoluted, panoramic pictures mixed in throughout.

6. Arya Doing Arya Things But This Time It Isn’t Annoying (Like It Kind Of Was Last Season) 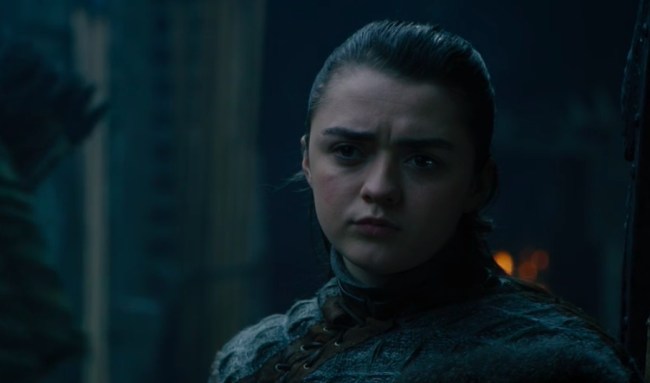 Arya was making the rounds the night before the battle, and to be completely honest, it was all pretty enjoyable.

She hung out with The Hound for a minute, dismissed Beric’s ramblings about the Lord of Light, got her custom weapon from Gendry, and then got Gendry’s custom weapon. 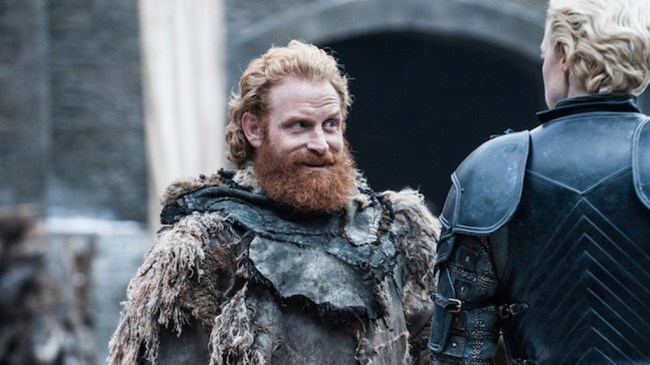 God, I love that man.

Thousands of ice zombies are coming in hot and everyone is probably going to die and all Tormund wants to know is where the “big woman” is at. 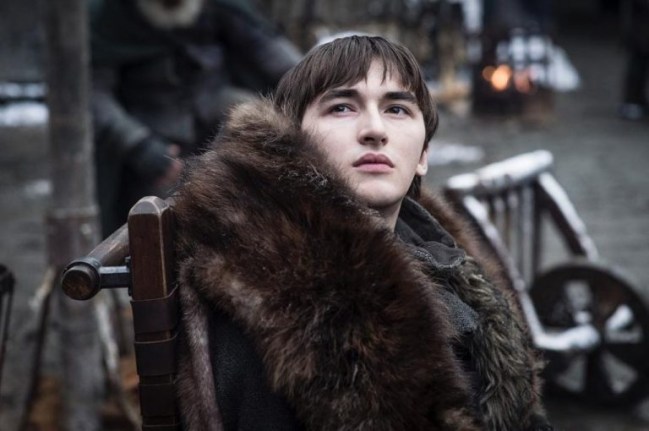 Twitter and meme culture loved Bran after last week’s episode and how could they not? My dude was everywhere (but also nowhere) and doing the same thing the whole time: being creepy and weird. You could see why Twitter would love him; being creepy and weird is Twitter’s unofficial mission statement.

This week, though, Bran brought the big guns.

First off, he didn’t narc out Jaime for pushing him out the window and then in a total bro move he nonchalantly forgave him. He’s the Three-Eyed Raven now, and while no one in Winterfell really knows what that means, he keeps saying it anyway.

After that, he dished on the Night King’s motivation, saying that he wants an endless night and for everything to be forgotten (which is how I feel about middle school.) Bran then—being someone who remembers everything—would pose a problem for someone looking to erase history.

As Bran said, he’s mankind’s memory. Get rid of him and erasing history would be infinitely easier.

So Bran is going to chill out by the Godswood tree with Theon and the Iron Born and wait.

That’s it. That’s the plan.

Everything will be fine, everyone.

Except if you’re Theon. 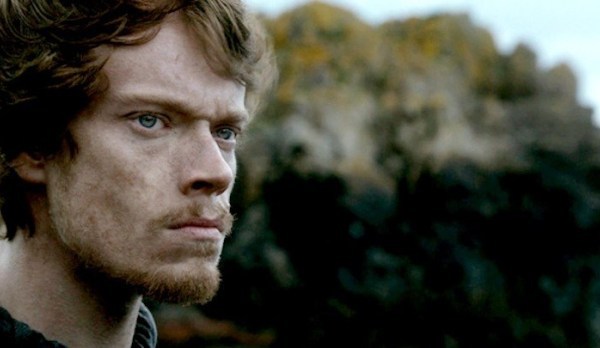 3. Keeping Up With The Lannisters 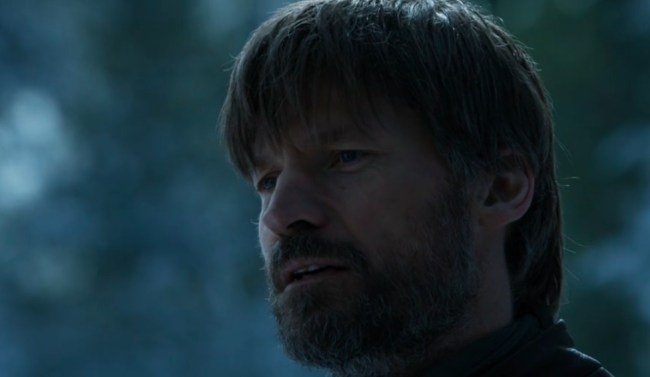 Jaime, who looks like he should be playing guitar for The Decemberists, escapes Daenerys’ wrath thanks in large part to Brienne vouching for him.

We all totally saw that coming. Joke’s on you, Game of Thrones.

I, however, did not forsee Jaime knighting Brienne and I’m going to be honest: that was a pretty touching scene. When it was over I, like Tormund, wanted to stand up and applaud. However, Tormund is much more of a man than me, so he did and I didn’t. That could be what happens when one person has giant’s milk coursing through their veins and the other doesn’t.

All in all, it was a big night for Brienne and…damn it. 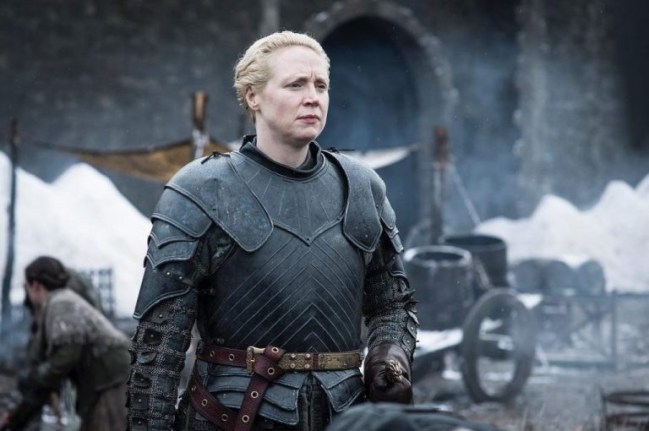 Brienne might have had a great night but Tyrion’s was as shitty as her’s was good. There was once a time when Tyrion was unstoppable but not anymore. That dude has had a rough go of it over the past season or so and if not for Jorah he would have gotten canned and become the one pouring out soup to soldiers.

To make things worse, Daenerys emasculated the hell out of him during the war council meeting when she insisted he skip the fighting and chill in the crypts. Daenerys obviously hasn’t seen the Battle of Blackwater episode. If she had, she’d think differently of Tyrion’s military prowess.

But no. She’s sending Tyrion to the crypts.

The crypts. A place that’s full of dead people. 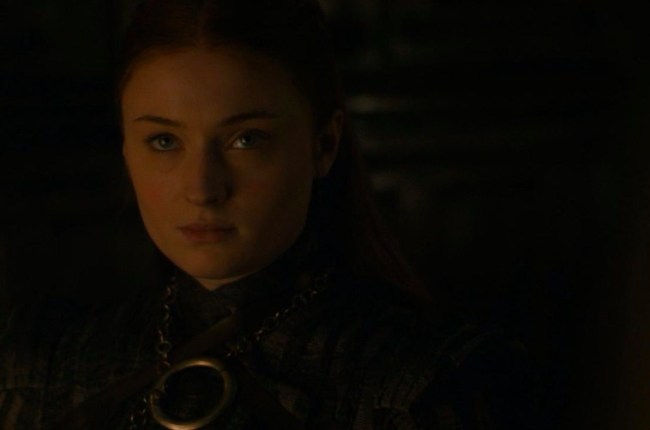 Sansa has become my barometer.

When Daenerys came to make good with her, Sansa held her own, and just when things were looking to turn a corner, really held her own by mentioning that pesky lingering idea of the North being its own kingdom now. Danys pulled her hand away when Sansa said that and that’s a big deal. If you know anything about body language (or basic human interaction) then you know that she’s pissed.

You should also know that Sansa could care less. Unlike Jon, who is laser-focused on the Night King and his crew, Sansa is thinking about the long-term. Her and Daenerys seem to be the only two people still thinking about a life after the battle with the dead and the battle with Cersei and not surprisingly, they don’t see eye to eye on what that life will be like.

Meanwhile, in downtown Winterfell—a place that has definitely never seen a person who isn’t white before (i.e. Missandei and Grey Worm)—the town is buzzing about the impending invasion of the White Walkers. Everyone is amped (and by amped I mean scared shitless). There’s lots of digging trenches and doing the thing where you stick wooden stakes in the ground to impale those who try and do you harm. Davos is dishing out some sort of soup and Gilly is the resident psychologist, making sure everyone is in good spirits as they hunker down in the crypts during the attack.

Like I mentioned before, I’m sure everything will turn out totally fine as someone who has the ability to bring the dead back to life and turn them into murderous ice zombies approaches said crypts.

Can Sansa tell me how to feel about that? I don’t have the best feeling but would love to know how she feels.

1. Daenerys And The Terrible, Horrible, No Good, Very Bad Day 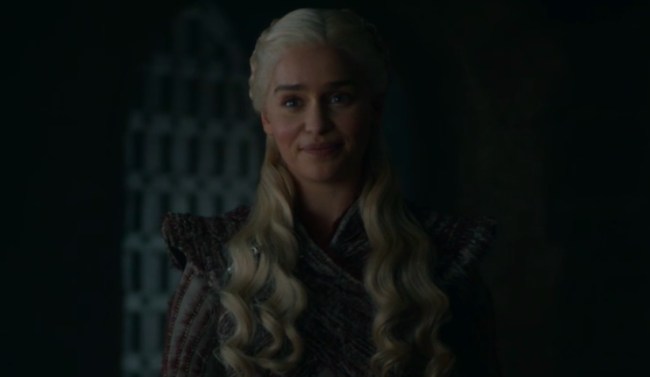 Daenerys did not get the warmest of receptions last week when she rolled into Winterfell, but whatever—the gal runs hot. Literally. She’s good. She’s got her dude, got her dragons, and got her sidepiece (looking at you Jorah.) For Daenerys, everything is pretty okay.

Or everything was pretty okay.

Things did get a little bumpy when she told Sam that she had roasted both his dad and brother, but we can get past that, right? 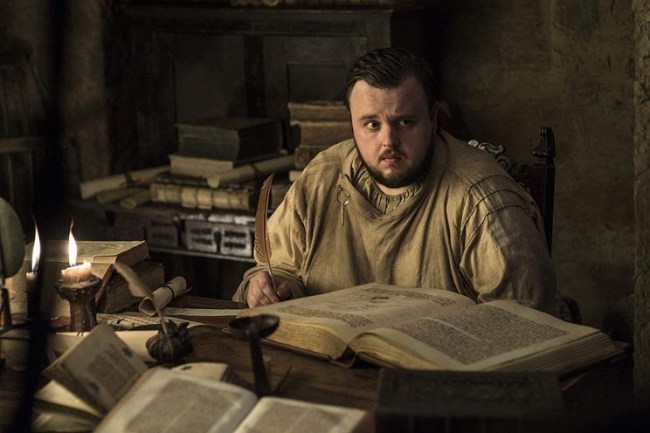 Yeah. Stand by on that one.

Now it’s a week later and things aren’t nearly as rock solid for our beloved Mother of Dragons. Her Hand, Tyrion, copped another L when Jaime let it be known that Cersei hoodwinked them all and then, while trying to make good with Sansa, very quickly learned that she isn’t one to be trifled with.

Daenerys also saw firsthand the faith that those who have pledged allegiance to Sansa have in the Lady of Winterfell when Theon showed up and vowed not to fight for Dany, but for the realm.

On top of all of that, right before shit’s about to get real, Jon drops the “I’m your nephew” bomb and it goes over about as well as expected, which is to say, NOT GREAT. Of course, Jon wasn’t going to sit on that information as Jon doesn’t sit on anything. Jon acts. Jon is a bottom-line dude, which is why he gave very little thought to signing off on Jaime enlisting.

In his defense, Jon’s whole life has been flipped upside down. How would you react to something like that happening? Hopefully by not telling your aunt/girlfriend that she is your aunt/girlfriend, but if so, no judgments here. Either way, you’d probably want to clear the air.

Unfortunately, doing so might not just upset the apple cart, but burn the effin’ apple cart to the ground and then there are no apples for anyone.

Heavy is the head that wears the crown indeed.

Throughout this season of the show, take note of the way stories and blog posts come out as the week goes on. For example, last week, Sunday night into Monday was recap time. On Tuesday, we were speculating about what the Night King’s message was, and on Wednesday, thinking homeboy might be a Targaryen. A day or so later we were now once again wondering if Daenerys is primed for an epic heel turn.

That story in particular should be up and running again by this Tuesday so prepare accordingly.