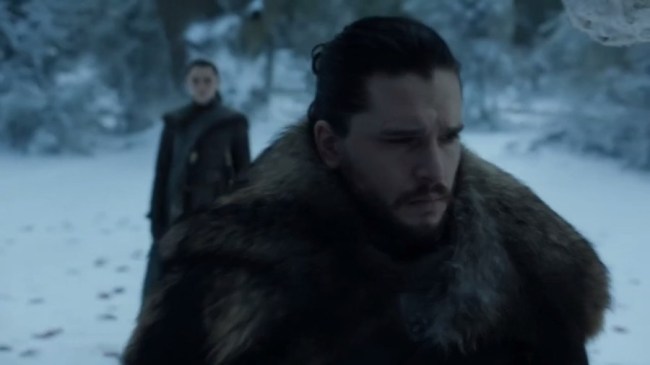 We are officially less than two weeks until Game of Thrones returns. HBO released a new trailer for Season 8 of Game of Thrones and it shows the special reunion of Jon Snow and Arya Stark, the first time the two have seen each other since Season 1.

Jon and Arya are seen in the Godswood in Winterfell, where Ned Stark and Catelyn were in Season 1 discussing on whether for him to be the Hand of the King for Robert Baratheon.

Boy, Jon Snow looks conflicted in the image above, almost like he’s done something he really, really, really regrets. You know, like having sexual relations with a family member. The promo video features much of the same footage from the first Season 8 trailer.

In other Game of Thrones news, the world-famous fountains at the Bellagio put on an incredible show fit for the Old Gods and the New. The Las Vegas casino used the iconic fountain to tease fans of the hit fantasy TV series with images of the Night King and dragons flying, all with the Game of Thrones theme song playing in the background. The special Game of Thrones show will run at the Bellagio nightly until April 13.

HBO released a new video titled “Inside Game of Thrones: A Story in Visual Effects,” giving you a behind-the-scenes view as to how they turn the world of Westeros to life.

RELATED: ‘Game Of Thrones’ Star Sophie Turner Confirms She’s Been With Girls – ‘I Love A Soul, Not A Gender’