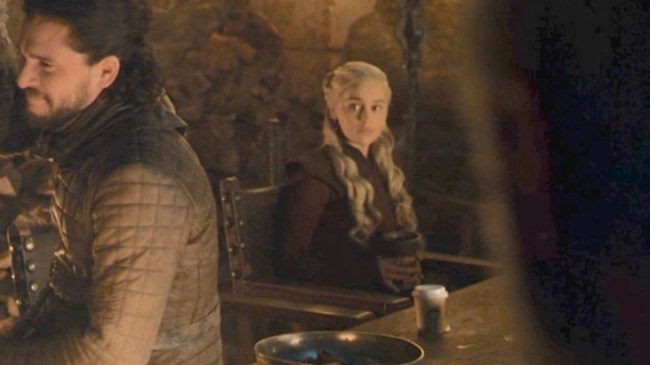 With the 2019 Emmy Awards just a couple of weeks away, the discussion around everyone’s former favorite show, Game of Thrones, will be cropping up again.

Despite the fact that the majority of the viewing audience was unhappy with the final season of Game of Thrones, the iconic show still set the record for Emmy nominations this year with 32.

So, whether we like it or not, we’re going to be hearing from the series showrunners — David Benioff and D.B. Weiss — really for the first time since Game of Thrones went off the air (you know, since they canceled their San Diego Comic-Con appearance at the last minute because they were too afraid to face the wrath of rabid Thrones fans). And, unsurprisingly, their latest soundbite about the series is a load of nonsense.

Speaking to the Japanese outlet Star Channel, Benioff finally addressed the infamous Starbucks cup that popped up in “The Last of the Starks” — the third to last episode of the series — and naturally, his response amounted to utter bullshit.

“It’s tradition that you make a little mistake, because only God can do anything perfect,” Benioff explained, comparing the error to crafting a fine Persian rug. “We were concentrating so much on Daenerys and Jon Snow that we just didn’t see this coffee cup right in the middle.”

“So at first I couldn’t believe it, and then it was embarrassment; ‘how did we not see this coffee cup in the middle of the shot?’ And then, eventually, it was just funny. This one is just a mistake, and it’s kind of funny to us now.” [Vulture via Star Channel]

Oh, I see Mr. Benioff, you didn’t notice a bright white Starbucks coffee cup because you were concentrating! Of course — intense concentration! How foolish of us!

If only Daenerys had concentrated as hard as you guys did, she would have noticed Euron Greyjoy’s massive fleet and could have possibly avoided the massive arrow that killed Rhaegal!

“We weRe cONcEnTRaTinG tOo hArd” pic.twitter.com/jpYI9e6PeU

The Game of Thrones universe will return to our television screens sometime in 2020 when the prequel series, tentatively titled Bloodmoon, premieres on HBO.