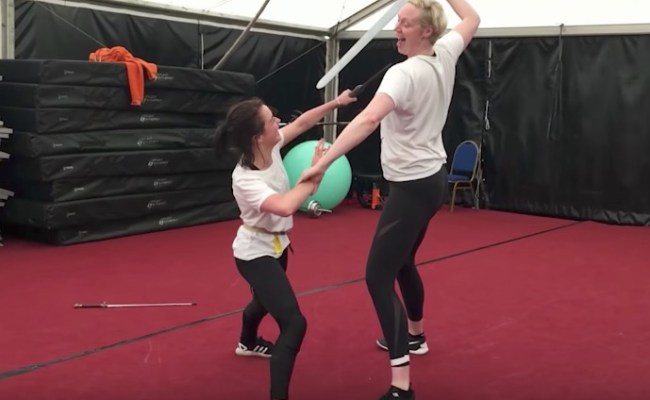 We’re several weeks into the Game of Thrones offseason right now. Things are at that point where we haven’t become inundated with outlandish fan theories yet because HBO still has our attention with badass behind-the-scenes footage.

Ugh, that knife flip…Arya is the best of the best.

That clip above is from HBO’s ‘The Game Revealed’ series of behind-the-scenes clips, and in it, we get to see Maisie Williams (Arya Stark) and Gwendoline Christie (Brienne of Tarth) preparing for their sword and knife sparring battle at Winterfell. In real time, during the episode, I thought this sparring match between the two ladies was okay at best. Arya Stark’s always been my favorite character on the show but I felt like the show’s writers were pushing her deadly prowess almost too hard towards the end of last season, and this sword fight was an example of that. However, the behind-the-scenes footage is a different story.

Here’s a side-by-side GIF breakdown of the ‘Warrior Women’ footage which shows Maisie and Gwendoline sparring next to Arya and Brienne battling swords in Winterfell:

I’m going to throw out my random fan theories now…So I hope you’re caught up (potential spoilers ahead)…I came to the conclusion last night that there is zero chance that Queen Daenerys (Khaleesi) survives the final Game of Thrones season. She and Jon are the logical couple to rule Westeros, but when you think about how bittersweet this series has been can you really imagine the show’s writers giving us that pay off? I envision some miracle pregnancy followed by Daenerys’ death. Jon is left to raise the baby by himself, and instead of forging a never-ending war against Cersei and House Lannister they reach some sort of truce…Or something to that effect. I just don’t see a future where Daenerys lives given how reckless she was in Season 7, and how powerful her death would be to the final season….Thoughts?