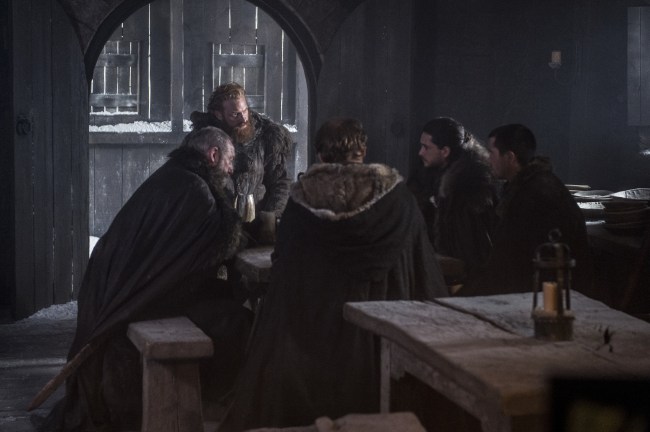 There are some potential Game of Thrones spoilers ahead if you’re not caught up, so be aware of that if you’re planning on reading ahead….So, last week’s ‘Eastwatch’ Game of Thrones episode we were reintroduced to Gendry, Robert Baratheon’s bastard child.

Gendry was a regular fixture on the show several seasons ago, and we have known for several months that he would be reappearing this season. In interviews, he tried to downplay the significance of his resurfacing as a minor role. Personally, I suspected that he’d show up as a secondary character who builds armor for one of the various warring factions in Westeros.

Gendry returned this week when Ser Davos and Tyrion snuck into King’s Landing so Tryion could speak with his brother. The idea was that hiding right on the enemy’s doorstep in plain sight was safer than trying to hide him away in a cabin out in the woods. That strategy worked, and Gendry’s now heading out North of The Wall with Jon Snow and his band of misfits who are seeking to bring back a white walker for Daenerys to see firsthand.

So what’s this all about? When Ser Davos showed up to see Gendry he told him that his new name would be Clovis: “You’re just Clovis, a smith who’s come to pay his respects before he heads off to work at the Winterfell forges.” Gendry didn’t stick with the plan and instead, he immediately introduced himself to Jon Snow as Robert Baratheon’s bastard, assuming their bastard connection and the friendship between their fathers would form a bond…He was right, and Jon took him along…So what’s up with that name, Clovis?

Before Gendry goes rogue and tells Jon exactly who he is, Davos tries to convince him to use an alias. The fake name that Davos comes up with for Gendry is “Clovis” and appears to be a little insight into Gendry’s future role in the show.
In the real world, there is a stone tool technology (see: spear/arrow heads and other stone tools) called Clovis. The significance of dragon glass (obsidian) this season, along with Gendry’s skill as a smith highlights the importance of Davos’ fake name for him. This appears to be a clever connection put in by the writers to suggest that Gendry will survive beyond the wall and will become the person to make the weapons out of the dragon glass for the war against the dead.
People are also pointing out how Clovis is the name of a Frankish king. Whatever the reason for the name choice, I think it’s safe to assume that it was a very purposeful decision by the writers. (via)

Given this very literal connection, it’s safe to assume that name wasn’t chosen at random. Methinks that Gendry will be re-working some dragonglass in the very near future, possibly as soon as this week’s episode WHICH HAS ALREADY LEAKED. I refuse to watch these leaked episodes because I think the shitty production quality destroys the overall effect of the show, but if you’re interested in that leak you can follow that link and check it out. (via r/gameofthrones)