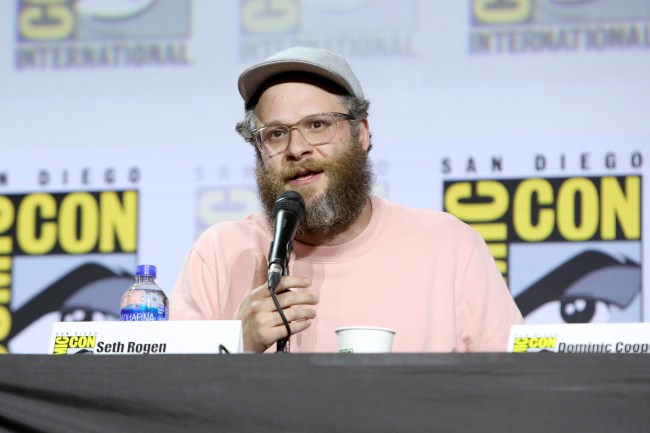 It seems like we have all started to move on from the final season of HBO’s Game of Thrones. We aren’t here to rehash how rushed the final season seemed and how unsatisfying the finale was because everyone already knows that last season was a steaming hot pile to guano.

We are here to talk about Seth Rogen speaking up about the disastrous final season of Game of Thrones during a panel at 2019 San Diego Comic-Con. The Game of Thrones showrunners/creators D.B. Weiss and David Benioff were set to appear at Comic-Con on their own panel but they backed out at the last minute and I think we can all assume it’s because they were about to get destroyed with questions from angry fans.

Seth Rogen appeared on stage for the Preacher panel, a show that he co-created as well as co-developed and he wrote several episodes. Preacher is entering its final season and that’s what sparked the Game of Thrones discussion as Rogen acknowledged the right and wrong way to wrap things up before opening it up to any GoT questions people wanted to ask him.

It started with this pretty harsh but absoLUTELY fair criticism of Game of Thrones and its showrunners D.B. Weiss and David Benioff being no-shows at SDCC 2019:

“I just wanna say we’re following the Game of Thrones panel, which is a f***ing nightmare, just objectively. I also know that the showrunners didn’t turn up, because they didn’t want to answer questions about the show… I’m not one of the creators of Game of Thrones, I am the creator of other TV shows, so feel free to ask me any Game of Thrones questions you might have throughout the night.”

Calling the Game of Thrones panel a ‘fucking nightmare’ is more than warranted. When you lose the show’s co-creators days before Comic-Con then everyone is left scrambling and it’s the biggest possible acknowledgment that they fucked up the show’s ending.

Seth Rogen was asked questions about the finals season of HBO’s Game of Thrones, here’s what he had to say about the ending itself:

“I imagine those guys regret making Bran the King because, ultimately, he doesn’t have the best story. [Arya] learned all that face shit, where’d it go?”

Here’s what Seth had to say when he was asked about Jamie and Cersei’s deaths which were so anticlimactic that I won $20 in a bet off my dad who refused to believe that two main characters like that could die so unceremoniously:

“I do, honestly. You don’t want to follow these people for three years and then have them die in rubble. Anti-climactic.”

Perhaps the most scathing criticism of Game of Thrones came when Seth didn’t even call the show or showrunners out by name. He was asked about his thoughts on the 4th and final season of Preacher and he answered “I’m here, at least, so I think that’s a good sign. I’m willing to show my face.”

How embarrassed of the final Game of Thrones season are D.B. Weiss and David Benioff that they didn’t even show up because they couldn’t face the fans and the impending criticism? I’m sure they had PERFECTLY usable excuses for why they didn’t appear at SDCC 2019 despite being scheduled to be on the GoT panel.

Their IMDB profiles show them currently working on several Game of Thrones spinoffs as well as HBO’s announced Confederate and a ‘Untitled Star Wars Project’ so I’m sure they’re busy, but too busy to show up at the biggest fan event of the year? Definitely not.

As for Rogen’s comments, it’s refreshing to see a high-profile star like Seth hurling very warranted and fair criticism at a show like Game of Thrones that became such a cultural phenomenon that millions and millions of fans were hooked only to be extremely let down and disappointed.

For more on this, you can head on over to Decider and/or WikiofThrones.