Gary Oldman Says He Used To Drink So Much He Would Sweat Vodka: ‘My Tongue Would Be Black’ 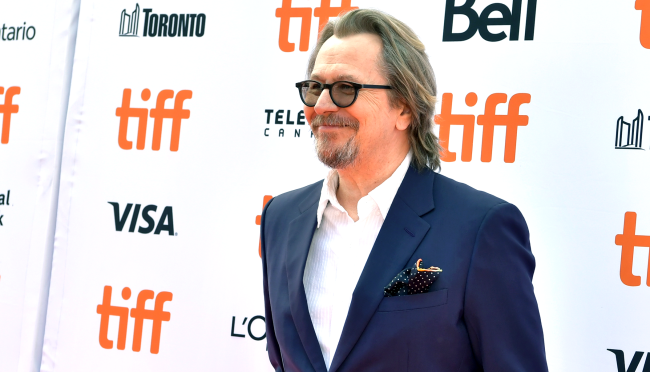 Legendary actor Gary Oldman, who is up for an Academy Award for playing the lead character in the Netflix-produced film Mank, recently sat down for an interview with the Los Angeles Times to discuss his acting career and how at one point in his life, like Herman J. Mankiewicz, the character he played in the film, he was a functioning alcoholic.

Oldman says it has been 24 years since he has had a drink, but it took two stints in rehab before he finally quit for good.

“When I was drinking, I was working and I was remembering lines, so you feel you’re getting away with it, though, deep down, beneath the denial, you know,” Oldman says. “Herman, with that self-effacing humor, he was at lunch, drinking with a friend, who said, ‘Why don’t you go home sober for once?’ And he answered, ‘What? And have [wife] Sara throw me out as an impostor?’ I did the same thing. I would sit down and tell the waiter, ‘I’ll have a large vodka tonic. And can you bring it now because I’m an alcoholic. I need it quicker.’”

“People romanticize it, and even I romanticized it,” Oldman continues. “All my heroes were drinkers or opium addicts, and you get all misty-eyed about these poets and playwrights and actors who were big drinkers. That great line, Dorothy Parker: ‘I’d rather have a bottle in front of me than a frontal lobotomy.’ I think it may have been Brendan Behan who said, ‘I’m an alcoholic with a writing problem.’ Now that’s witty. Great lines. But you can’t separate the two. Scott Fitzgerald said, ‘You take the first drink, and the drink takes you.’”

Oldman then goes on to admit just how much he used to drink in those days.

“I used to sweat vodka. It becomes such a part of you. My tongue would be black in the morning. I blamed it on the shampoo. I wouldn’t wish it on my worst enemy, to be in the grip of it. It’s hell. And that self-effacing humor? That’s just there to mask the inadequacy.”

He also shared a very relatable story about some time he spent with the late David Bowie “sailing around Mustique, looking for the perfect cove so they could drop anchor and take the dinghy to the beach to grill lobster.”

On that trip, Oldman told Bowie a story that he believes was the inspiration for the song “I Can’t Read.”

“The story was about a guy who asked for directions, and I said, ‘Oh, you follow the signs to the roundabout,’ and he said, ‘I can’t read,’” Oldman remembers. “Now, David was a ferocious reader, and he was struck by this story. ‘Oh, my God. Can you imagine if you couldn’t read?’ And he took that and made something from it.”

“Having been in recovery,” Oldman continues, “one of the most profound lines is ‘planet Earth is blue, and there’s nothing I can do.’ That is it right there for me. There’s nothing I can do. That’s the thing where you sometimes drink because you need something habitually. You’ve got to clear the fog. And finally you go, ‘There’s nothing I can do about that. No matter what I feel, a drink’s not going to do it.’ Such a wonderful, simple line. David was a poet. Not a day goes by when I don’t miss him.”

Here’s Oldman performing the song during a livestream concert tribute to Bowie on what would have been his 74th birthday.

In one of so many fan favorite moments from last night, Gary Oldman sings I Can’t Read. Watch this and the entire show now for a very limited time today with tickets at https://t.co/UjNJYlU8a8 pic.twitter.com/yqqy58uSrT