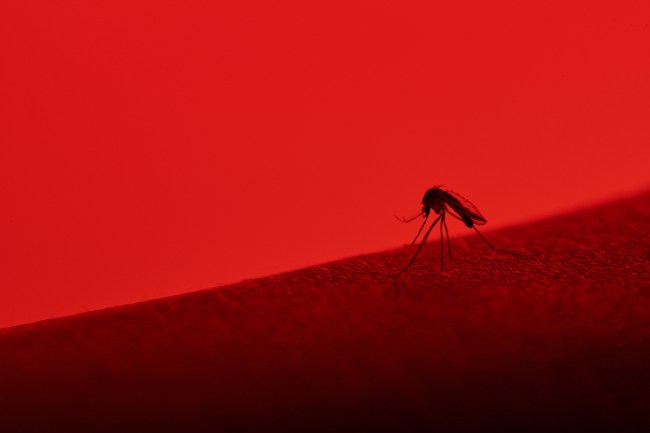 In what sounds like a Black Mirror synopsis, a biotech corporation is unleashing a billion genetically engineered creatures into the United States. Hopefully, this experiment fares better than all of those science-fiction movies that end with humans facing extinction against mutant insects.

Oxitec, a British biotech company, will release genetically modified Aedes aegypti mosquitoes this week in Florida, a first in the United States. The company plans to release up to a billion mosquitoes in the next two years in Monroe County, which includes the Everglades and the Florida Keys.

The Florida Keys Mosquito Control District (FKMCD) partnered with Oxitec to develop methods for controlling the Aedes aegypti mosquito population, which spreads deadly diseases such as dengue, chikungunya, Zika, and yellow fever. The biotech corp engineered mosquitoes are guaranteed that the future is not female. The Frankensquitoes have been modified to pass on a particular protein when they bump nasties, which prevents baby female mosquitoes.

The website Undark explains it a little more scientifically than I can:

At Oxitec’s laboratory in the U.K., the company genetically engineers the mosquitoes, giving the insects the “self-limiting” gene that makes the females dependent on the antibiotic tetracycline. Without the drug, they will die. Eggs from these genetically-altered mosquitoes — which will hatch both male and female insects — will be shipped to the Keys. Mosquitoes require water to mature from an egg to an adult; when Oxitec’s team adds water to the boxes the mosquitoes will be deployed in, both GM males and GM females will hatch. With no tetracycline present in the box, the GM females are expected to die in early larval stages.

Oxitec’s OX5034 mosquitoes are the first genetically modified mosquitoes approved for release in the United States. Oxitec conducted a trial with mosquitoes in Brazil, and released a billion of a previous version of GM mosquitoes in several locations, including the Cayman Islands.

The genetic genocide of female mosquitos was approved by the Environmental Protection Agency (EPA) and Florida authorities, including the Florida Department of Agriculture and Consumer Services.

That sounds like a fantastic idea in premise, but Oxitec’s scientists were so preoccupied with whether or not they could, they didn’t stop to think if they should. Some South Florida residents don’t think having insects altered by humans released into the wild is a super great idea and are concerned that it may exacerbate the pest problem.

In September 2019, there was a 30-day public forum for Floridians to weigh in on the GM mosquitoes – there were 31,174 comments opposing the release of the mutant mosquitos and 56 in support. Residents are demanding undisputable proof that this process actually curbs disease transmission.

Environmental agency Friends of the Earth stated, “Scientists have raised concerns that GE mosquitoes could create hybrid wild mosquitoes which could worsen the spread of mosquito-borne diseases and could be more resistant to insecticides than the original wild mosquitoes.”

“This is a dark moment in history. The EPA must halt this live experiment immediately. The release of genetically engineered mosquitoes puts Floridians, the environment, and endangered species at risk in the midst of a pandemic,” said Dana Perls, the food and technology Program Manager at Friends of the Earth.

“What’s the most upsetting is that the very people that are going to be most impacted, both by the benefits or the risks of such a decision, have like the smallest voice in how these choices are made. I think that’s a really big issue,” says Natalie Kofler, a molecular biologist and bioethicist who founded Editing Nature, a site that “informs, convenes, and advocates for responsible science and environmental justice to guide genetic engineering in the wild.”

Barry Wray, a member of the Florida Keys Environmental Coalition, said, “EPA has set the lowest possible bar for approving genetically engineered insects and has opened Pandora’s Box for future experiments that will slide through with little investigation.”

Some scientists think the presence of tetracycline in the environment poses a real risk to the project.

According to Jennifer Kuzma, co-founder and co-director of the Genetic Engineering and Society Center at North Carolina State University, tetracycline is commonly found in sewage, and it is also used in Florida to prevent bacterial diseases in agriculture — particularly in citrus groves. The presence of the antibiotic may mean that it will remain in the environment, especially in water where the mosquitoes breed, which could allow Oxitec’s female mosquitoes to survive. While the company does not plan to release the mosquitos near areas where the antibiotic is used, Kuzma says the EPA’s risk assessment did not include testing of any standing water for tetracycline — something, she adds, “would have been easy enough to do for good due diligence.”

The first phase of the project starts with 144,000 genetically altered mosquitos being released over the next 12 weeks. As many as 12,000 mosquitoes will be released each week in Ramrod Key, Vaca Key, and Cudjoe Key.