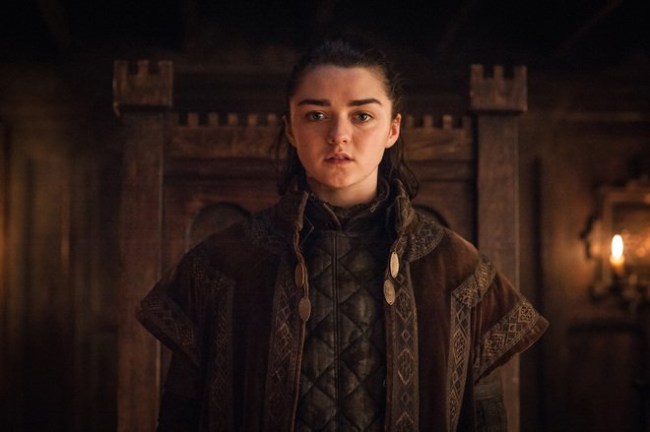 With all of the love and companionship and wine from Episode 2 of Season 3, one could get hopeful about the future of the fine folks of Westeros. Then you remember that George R.R. Martin is no fan of happy endings. This means last week’s cherry Game of Thrones episode is only preparing you for the total annihilation of your favorite characters when the Battle of Winterfell arrives on Sunday. But did George R.R. Martin already hint at Arya Stark’s death a long time ago?

According to a Game of Thrones fan theory, George R.R. Martin already laid down a clue that Arya dies in the Battle of Winterfell. Please remember, Martin is not shy about killing off beloved characters. RIP Ned Stark, Catelyn Stark and Robb Stark.

RELATED: Arya Will Use Her Many-Faced God Powers To Kill The Night King According To ‘Game Of Thrones’ Fan Theory

Redditor ultra1994 posted a fan theory in the A Reddit of Fire and Ice.

In George R.R. Martin’s A Song of Ice and Fire novels, the fantasy author gives possible clues that Arya will face a premature demise. An exceprt from the novels provides a possible prophecy to the early demise of Arya Stark.

“The show is done,” he said. He bent to scratch Ghost behind the ears. The white wolf rose and rubbed against him. “You had best run back to your room, little sister. Septa Mordane will surely be lurking. The longer you hide, the sterner the penance. You’ll be sewing all through winter. When the spring thaw comes, they will find your body with a needle still locked tight between your frozen fingers.”

RELATED: Teaser Photo From Battle Of Winterfell Episode Has ‘Game Of Thrones’ Fans Convinced A Dead Character Is Alive

As you know, Arya’s prized sword is named Needle. Jon Snow gave her the super-thin sword, also the name of a sewing instrument. Jon is of course referencing a sweing needle, it could have a double meaning of Arya sword called Needle.

While Martin is quick to kill off other favorite Game of Thrones characters, he is cautious to write off Arya Stark. At a 2016 panel in Mexico, Martin pointed out that Arya is his wife’s favorite character. “She does have a favorite character, and she has threatened to leave me if I kill that character, so I do have to be very careful about that,” Martin said. We might need Arya to live past the Battle of Winterfell to wear the face of Jaime Lannister to kill his sister Cersei Lannister. Another person on Arya’s kill list.