‘Game Of Thrones’ Fan Theory: Melisandre Is Currently In Winterfell Ready To Fight And You Missed Her Last Episode 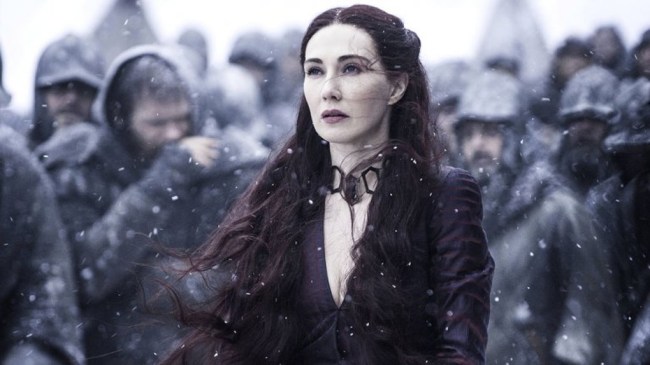 A new Game of Thrones fan theory suggests that Melisandre is already in Winterfell because she wants to help Jon Snow fight the Night King and his Army of the Dead. The reason she is fighting for the Starks in the Battle of Winterfell is because she has deep regret over “terrible mistakes” she made in the past with her witchcraft and predictions.

We haven’t seen Melisandre in some time now, the last time she appeared on Game of Thrones was in Episode 3 of Season 7 titled “The Queen’s Justice.” That is when she was at Dragonstone to see the work that she had done be uniting Daenerys Targaryen with Jon Snow AKA Aegon Targaryen.

She has an intriguing conversation with Varys on the cliff overlooking the seas. “I’ve done my part. I’ve brought ice and fire together,” Melisandre tells Varys about Jon and Dany. “My time whispering in the ears of kings has come to an end.”

When Varys asked Melisandre why she did not greet Jon Snow, she replied, “I did not part on good terms with the King in the North or his advisor. Because of mistakes I made, terrible mistakes.” Jon Snow’s advisor is Ser Davos.

She tells Varys that she is off to Volantis in Essos. Varys warns her that she shouldn’t return to Westeros because he’s “not sure she’d be safe here.” Melisandre responds, “Oh, I will return dear Spider. One last time. I have to die in this strange country, just like you.”

One of Melisandre’s “terrible mistakes” was sacrificing Shireen Baratheon as a gift to R’hllor, the Lord of Light so that Stannis Baratheon could win the first Battle of Winterfell. Melisandre burned Shireen alive while her mother and father watched their only living daughter die.

The grief would cause Selyse Baratheon to commit suicide. In the end, Stannis lost the Battle of Winterfell and he was eventually beheaded by the blade of Oathkeeper, Brienne of Tarth’s sword. Shireen’s death scene is still the most uncomfortable scene in all of the uncomfortable scenes of Game of Thrones.

Will Melisandre attempt to make amends for her terrible mistakes? Could she have used her magical ruby necklace to become a Shireen look-alike? In the last GoT episode, a young girl who is suffering with Greyscale on her face, much like Shireen, purposely went to Ser Davos to get food and tell him that she wants to fight for her side.

Ser Davos would have never let Melisandre in to fight for Winterfell after what she did to Shireen, the little girl who taught him how to read. Plus, she tried to sacrifice Gendry, but Davos helped him escape. This means that the Red Priestess would have to use her Lord of Light sorcery to sneak into Winterfell. The little girl says, “I want to fight too.”

Gilly, who was also taught to read by Shireen, tells the little girl that she would feel safer with her protecting her and her son in the Crypts of Winterfell. The little girl says, “Alright, I’ll defend the Crypt then.” She then walks away with no adult supervision.

If you notice, the little girl is bundled up quite a bit, which is understandable when winter is here. But she’s covered up so much that Melisandre’s mystical necklace could be tucked underneath her clothes.

What if she's the young girl who is defending the Crypt? It's too much of a coincidence that this little girl goes up to Davos with a scar on her face.