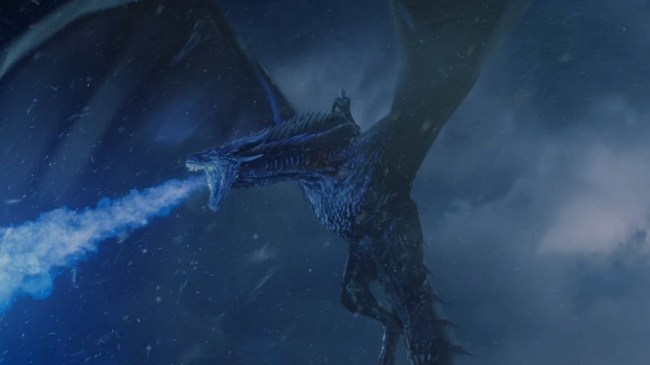 We’ve known about the massive Battle of Winterfell for a year now and we’ve known about it going down in Episode 3 of Season 8 for nearly six months, and it is finally only days upon us. The biggest and most epic Game of Thrones ever took 55 consecutive nights across three locations to film and will have a run-time of 82 minutes, the longest in the HBO series. And in the most critical battle of the series, one Game of Thrones fan theory suggests that the Night King will not be there for the fight of the year.

The Night King annihilated The Wall with the help of his zombie ice dragon and will get a chance to be reunited with his old friend Jon Snow. Plus get the chance to capture or kill the Three-Eyed Raven AKA Bran Stark (especially since Theon Greyjoy is supposedly his “protector”), you’d think the Night King would pull up a chair and enjoy some popcorn as his hordes of the undead march on Winterfell. But a new Game of Thrones fan theory says the Night King is too smart to stick around for the greatest military engagement since the Battle of the Bastards.

In the A Song of Ice and Fire Reddit, user qp0n has developed a Game of Thrones prediction that the Night King will not join the Battle of Winterfell, but will instead fly to King’s Landing for a surprise attack on Cersei Lannister that makes much more strategic sense.

RELATED: Intense ‘Game Of Thrones’ Fan Theory On How The Night King Will Conquer Westeros

“If you play out what the Battle of Winterfell would be like in your head if the NK+Viserion would be there… it would be easy for Drogon/Rhaegal to take out the zombie dragon; it’s 2v1 and wight’s all can be killed by fire.. including Viserion,” the theory begins. “It would not be difficult to simply fly up to Viserion and breathe fire on him, and that would be that. THE NIGHT KING IS NOT STUPID, not enough to kamikaze his most powerful asset. – If you have a superweapon that you can’t use against a particular target, then you find a different target.”

“Most people have come to assume that the living will lose The Battle of Winterfell and fall back to Moat Cailin,” the theory says. “I predict they actually win the battle… only to find out soon after that there is a new Army of the Dead much bigger and much further south… the population of King’s Landing.”

The Night King and his ice dragon could kill anyone protecting and manning the other castles on the way to King’s Landing to give his Army of the Dead an easy path south or his new army of dead from King’s Landing and easy path north towards the gang at Winterfell.

The theory points out that in Bran’s visions from Episode 2 of Season 4 when he touches the Weirwood tree, he sees King’s Landing, but with only one dragon flying overhead. The vision did not show the actual dragon, but only its huge shadow. The idea is that the one dragon is Viserion and the Night King is flying it not two shadows of Drogon and Rhaegal. Bran also sees the Iron Throne room having snow inside as if the ceiling had been destroyed.

RELATED: A New Clue About The Night King Has Resulted In One Of The Wildest ‘Game Of Thrones’ Theories So Far

Daenerys Targaryen also had a vision of the Iron Throne room with snow on the ground, but her vision showed the actual destruction of the ceilings. The kind of damage a fire-breathing or ice-breathing dragon could reign down from above. Dany seems mystified by the ceilings being completely destroyed as if her dragons didn’t do that damage.

Also in Dany’s vision, she nearly touches the Iron Throne, but at the last second goes to her crying dragons. The next thing she knows she’s north of The Wall. Is the vision foreshadowing how she could have attacked Cersei and King’s Landing, but ended up taking her Dothraki Horde and Unsullied to fight the undead up north?

Last we saw Bronn, he was headed north to assassinate Tyrion Lannister. And while Bronn is an assassin who only cares about himself, remember what Tyrion told Bronn seasons ago: “Though I would treasure your friendship, I’m mainly interested in your facility with murder. And if the day ever comes where you’re tempted to sell me out, remember this: Whatever the price, I’ll beat it. I like living.” 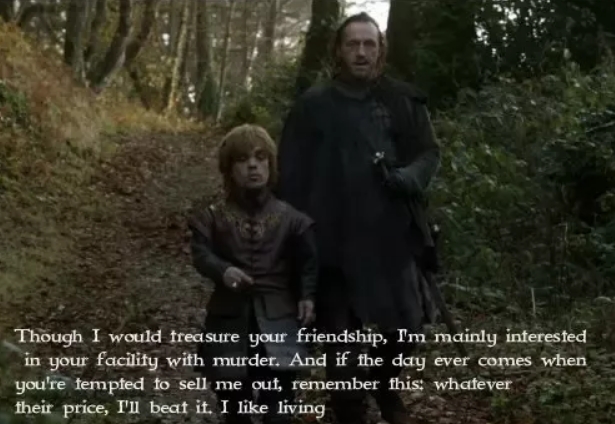 Cersei gave Bronn several chests of gold for him to murder her two brothers with the crossbow that Tyrion killed their father with when he was on the privy.

Bronn wants a castle, that’s for damn certain. But what if Tyrion, Hand of Queen Daenerys, could promise him two castles? The Twins are looking pretty empty these days after Arya Stark killed Walder Frey and many others. Bronn would certainly switch sides for two castles and maybe he saw the Night King flying towards King’s Landing and could inform Jon Snow and Daenerys Targaryen that the Night King has turned all of King’s Landing into zombies.

RELATED: What Is The ‘Showstopper’ Weapon That Gendry Is Making For Arya And Is The Night King On Her Kill List?

Plus, the Night King could resurrect all of the soldiers who died from recent wars in Westeros such as Loot Train Attack, Battle of the Blackwater and the Battle of the Bastards. Not to mention the million people who live in King’s Landing. That would give the Night King two huge undead armies to sandwich the Snow/Targaryen forces.

Why jeopardize his most powerful weapon, the ice dragon, when he can send his White Walker generals and the massive army of wights to do the dirty work. He can always reanimate more dead people. Remember, splitting up his army already worked against the Lannisters when Robb Stark pulled that strategy against Tywin.

Maybe the Night King already knows that Jon Snow is planning to make a concerted effort to take him out and his magical armies will follow. During the war council scene in Episode 2 of Season 8, Jon said, “We can’t beat them in a straight fight,” Jon says. “The Night King made them all, they follow his command, if he falls, gettin’ to him maybe be our best chance.” Then Jaime Lannister says, “If that’s true, he’ll never expose himself.”

Meanwhile Cersei thinks she has weeks or months before the Snow/Targaryen alliance or the undead come for King’s Landing. To make matters worse, the Golden Company didn’t even bring any elephants from Essos. They don’t stand a chance against an ice dragon.

The only chance the living might have is if they can somehow survive the Battle of Winterfell and then use Bran’s Greensight powers and his warging abilities to counter the Night King and figure out his location and next move.

RELATED: We Finally Know Some Major Details About The Epic ‘Game Of Thrones’ Battle We’ve All Been Waiting For