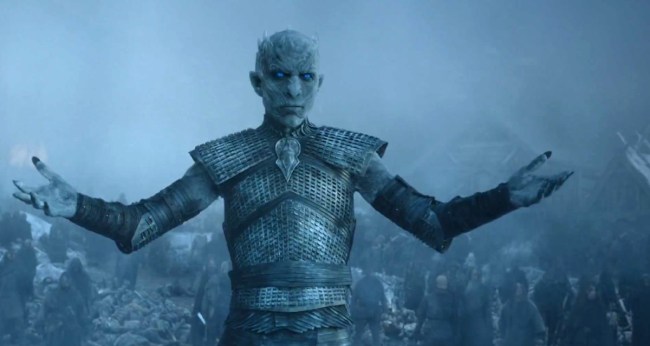 Stop👏Reading👏Now👏If👏You👏Don’t👏Want👏To👏See👏Spoilers👏. We’re still a year+ away from new Game of Thrones and so that means if you want some Thrones-related content then you’ll have to delve into fantastic fan theories. This popular fan theory on the Game of Thrones Reddit page explains how Jaime Lannister may be the key for the Night King to conquer Westeros.

Thanks to a nuclear-level leak, we know that Winterfell will be destroyed once and for all. We also know the opening location for the final season. We may also know of the Night King’s plan to capture Westeros with a sneak attack of King’s Landing.

Redditor TheTripleB presented a thorough and intense theory on how the Night King would bypass a battle in the North against Jon Snow, Daenerys Targaryen and her two dragons, for a softer target of King’s Landing. The theory suggests that King’s Landing might be ripe for the taking because Jaime will take with him some of most of the Lannister army to fight the undead in the North.

While the forces in the North battle the hordes of undead White Walkers and Wights, the Night King and Viserion sack King’s Landing. The Night King could get to the area around King’s Landing and resurrect all of the corpses into a new army of undead. The theory suggests that the Night King kills Euron Greyjoy and the Golden Company and they too become part of the seemingly unstoppable zombie army.

The theory is backed up by both Bran Stark and Daenerys having visions of the Red Keep throne destroyed and covered in snow. Bran’s vision included a dragon flying high above King’s Landing.

Other notable revelations from the fan theory include Bran and Samwell Tarley keeping Jon’s parentage a secret after the King of the North announces that he is getting married to Daenerys (his aunt) and that Daenerys is pregnant (again, his aunt). Jaime will end up killing Cersei, which is what many have predicted will happen for a while now. Dany dies during childbirth, the dragons die in battle but lay eggs before they die. Most importantly, Cleganebowl allegedly won’t happen. If there’s no CleganeBowl we riot.