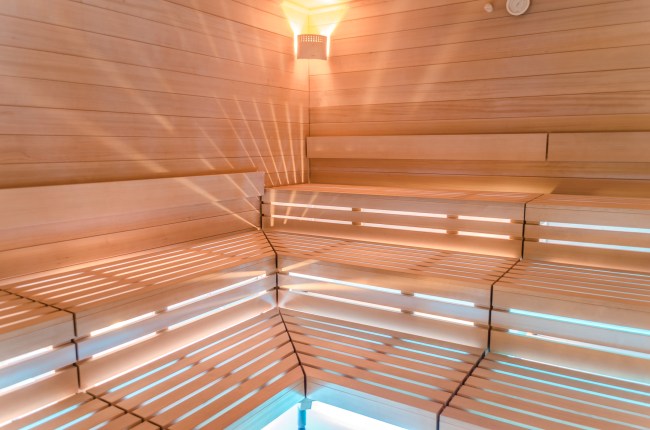 Now seems like a perfectly good time to shut out everything that’s on your mind and laugh at this enjoyable story shared by a woman who visited a sauna in Germany a few years ago and her relaxing spa experience quickly devolved into the most embarrassing moment of her life.

A woman named Anbara Salam took to Twitter to share her story of going to the German spa and getting locked out naked and having to walk through public wearing nothing with people crowded around her, all when she thought she’d be chilling in the sauna. I’m sure there’s a metaphor in there somewhere about life’s capacity to throw you curveballs but I won’t dig too deep.

As a public service in these stressful times I'd like to offer, as a palate cleanser, the most embarrassing moment of my life.

10ish years ago, my ex bf and I visited a spa in Germany. It's swimsuits in the pool but you have to be naked in the sauna.

Bf and I agree to meet in the café. I get undressed, grab a lil towel and go off to the sauna. There are 2 unmarked doors at the end of a corridor, I take a guess and go through the one on the left.

It's not the door to the sauna. It's the fire escape.

The door locks behind me.

I am trapped inside the fire escape, in the nip.

It's 2 storeys, dark, grim, noisy bc of huge fans. I bang on the fire escape door until I actually hurt myself. Nothing. Yell for help. Nothing.

Fully crying, I run downstairs, trying to work out which part of me I should cover with the lil towel – my face? A single buttock? 4/

Bang on the 2nd floor doors for 10 mins. Yell some more. Nothing.

On the ground floor there's an unlocked door. Jackpot! But no, it's a terrifying machine room with massive fans & pumps & 'electrocution' symbols on everything.

Friends, there's nothing quite like running, naked & crying, around an industrial machine room. I spot a service lift. Out of sheer panic, I run into the lift, covering each boob in turn, mashing the buttons.
6/

I go up & down in the lift a few times. There's a security camera in the lift. Torn between 'I don't want anyone to see this' and 'I rlly rlly want someone to see this & rescue me' I move the lil towel between strategic areas while sobbing & waving at the camera

After a few rides up & down, there's a German loudspeaker announcement, and I just *know* it's about me. Like 'the naked girl in the fire escape lift please stop mashing the buttons' or whatever, but I can't understand it, so just cry louder and gesture at the camera

Eventually the lift doors open. A spa employee stands there. He is the most dressed man to ever be wearing clothes. He has brought NO TOWEL for me. He says something in German, I cry, he sighs, waves for me to follow him. I go after him, still switching around this washcloth

Apparently the only way out of the fire escape is to fully LEAVE THE BUILDING. So I'm cowering on the edge of the pavement, hysterical, & he points round the corner. The only way back in is along the street, THROUGH RECEPTION, where ppl are queuing out the building

I now have an out of body experience. A shame black out. I have reached my max. I go fully through embarrassment and out the other side. Time slows down. I can hear the music of the spheres.

I stop crying, drop the washcloth, shoulders back, head high, follow him along the street, past ppl parking their cars, standing in line with their families. People say things, point. I cannot hear them. I am transcendent with shame. Untouchable.

Reception is BUSY. So busy he has to yell at ppl to make way so I can get through the crowd. The guy explains (I'm guessing) the situ to the receptionist. This takes actual minutes. An old lady gives me her pool float. It is shaped like a lobster. The claws rest on my boobs.
13/

The receptionist asks me for ID. I am wearing only a lobster. Where, friends, where would I be keeping my fucking ID?  Receptionist sighs & lets me through the turnstile.
14/

Ten minutes later when I run sobbing into a towel and find my bf in the café he has the AUDACITY to be grumpy because he's been waiting for an hour.

She went on to confirm that this is a 100% real story and that it’s taken her nearly 10 years to laugh at it.

Sadly, I can relate. I found myself sleepwalking, naked, and locked out of my apartment the night Eli Manning and the Giants beat Tom Brady and the Patriots in the Super Bowl. I was forced to fashion myself some trousers out of two 24-packs of Bud Heavy that I’d thrown out earlier that night and bang on my door until my blacked-out roommates eventually emerged to open the door at least an hour later.

Also, did I mention that I woke up from sleepwalking because I fell into the stairs and I cut myself so I was naked, bleeding down the right side of my body, covering my junk with Budweiser boxes, and trying desperately to wake my roommates up. Great time. I feel for her. Though my situation was entirely my own doing. I should’ve worn clothes to bed and locked myself inside somehow. I would’ve made it back into my apartment sooner but one of my roommates thought there was an axe murderer at the door and was too afraid to look through the keyhole. Eventually, he woke up another roommate who started laughing uncontrollably as he looked through the keyhole and saw me standing there, naked and bleeding, holding beer boxes. Then we all went to sleep.