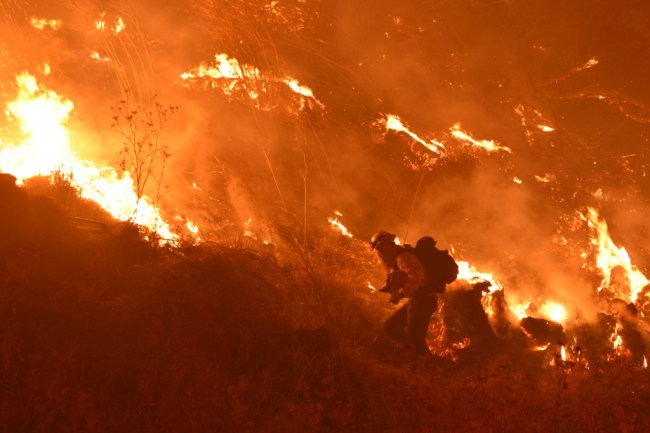 I feel confident in saying I’ve watched the cinematic classic that is 2003’s The Italian Job more than any other human on this planet, and in that film, a large Samoan man reminds Mark Wahlberg there are three things in the world you don’t mess with: Mother Nature, mother-in-laws, and motherfreaking Ukrainians.

Last week, hundreds of thousands of people in California recently got a reminder of why you don’t mess with the first entry on that list in the form of the Kincade Fire, which is currently sweeping across the northern part of the state as firefighters do everything in their power to extinguish it.

Now, people a bit farther south are dealing with another force to be reckoned with in the form of the Getty Fire, which was sparked on Monday morning in Los Angeles and has consumed more than 500 acres and counting as people—including Arnold Schwarzenegger and LeBron James—flee the area in increasing numbers.

We evacuated safely at 3:30 this morning. If you are in an evacuation zone, don’t screw around. Get out. Right now I am grateful for the best firefighters in the world, the true action heroes who charge into the danger to protect their fellow Californians. #GettyFire

Man these LA 🔥 aren’t no joke. Had to emergency evacuate my house and I’ve been driving around with my family trying to get rooms. No luck so far! 🤦🏾‍♂️

Plenty of people have posted photos and videos of the fire as it continues to rage, and as you’ll soon see, there’s a reason officials are encouraging people to do whatever they can to evacuate.

savannah and i were driving on the 405 when we saw this big green light and then two small little fires. we immediately pulled over and called LAFD and 10 minutes later it turned into this big fire. for those near getty center, please stay safe and follow evacuation orders ❤️ pic.twitter.com/ochLNiaUNW

A look at the #GettyFire from the 405 Fwy & Getty Center Dr. @CBSLA pic.twitter.com/x4yipbvZM0

Horrible situation on #tigertail right now in #Brentwood – have counted 6 homes on fire and there’s likely more. The #GettyFire continued to burn out of control in the hills of Brentwood. Stay with @ABC7 for live coverage pic.twitter.com/u8IZM9eN1c

The #GettyFire is now moving down the hillside towards the 405 Fwy. I’m all the way on the northbound side, and I can feel the heat from the flames! @CBSLA pic.twitter.com/02bE4VcWNo

The 405 Highway in LA is an absolute horror scene. The #GettyFire is no joke.

It should go without saying that anyone in the surrounding area should do everything in their power to get the hell out of there, as it doesn’t appear it’s going to be extinguished at any point in the near future.