BOOM! There’s Already A Teaser Trailer For ‘Ghostbusters 3’ And You Can Watch It Now 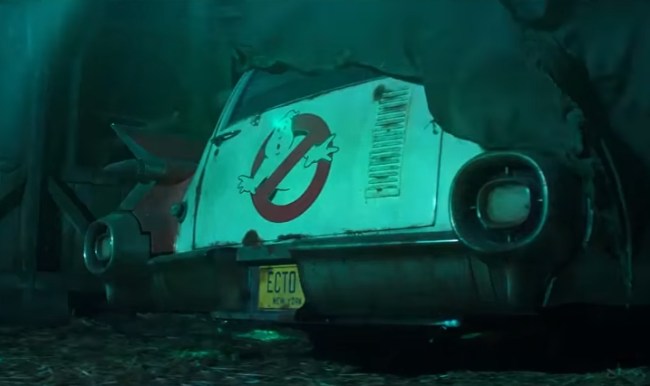 We JUST learned about a sequel to the original Ghostbusters movie from 1984 early Wednesday morning. Hours later… BOOM! There’s already a teaser trailer for Ghostbusters 3!

Only hours after Juno director Jason Reitman announced he was making a new Ghostbusters movie in the same universe as the two original proton-blasting movies that his dad Ivan Reitman directed, Sony Pictures gives us our first glimpse of the new ghost-detaining flick.

The teaser trailer for the Ghostbusters threequel features a worn-down barn set maybe in upstate New York in the fall with dead leaves blowing all around. There is ectoplasm dripping from a nearby fence. Inside the barn there is flashing streaks of lights. With the music from the library scene of the original Ghostbusters movie by the film’s composer Elmer Bernstein in the background, there is something under a huge tarp. The wind blows the tarp up and unveiled the original Ecto-1 vehicle used by the Ghostbusters squad, but it is rusty and has seen better days. Then the sound of a proton-pack powering up goes off.

Is this the barn of Peter Venkman (Bill Murray), Ray” Stantz (Dan Aykroyd), or Winston Zeddemore (Ernie Hudson)? Sony or Reitman have not announced any casting for the Ghostbusters sequel and did not specify if any of the original cast would return.

Reitman co-wrote the script with Gil Kenan (Monster House) and will direct the next chapter of Ghostbusters as his dad did in the 1980s. Ivan Reitman is a producer on the entertainment project that is sure to polarize many as to whether or not we need another Ghostbusters movie. Ghostbusters 3 is scheduled to arrive in the summer of 2020.