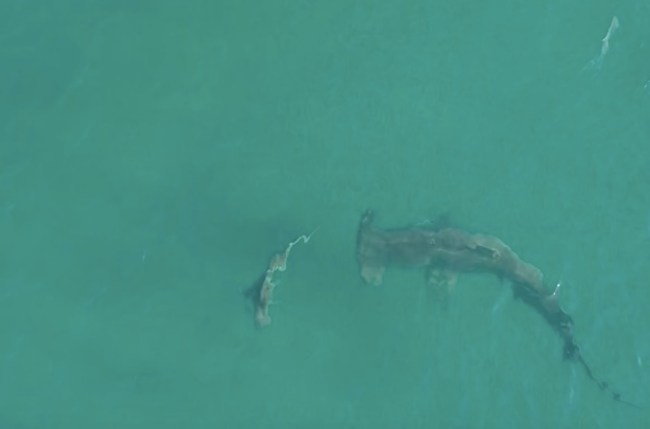 The annual blacktip shark migration up and down the East Coast of Florida is one of the craziest natural events to behold in the Sunshine State.

The sharks are following an easy meal (baitfish) and those smaller fish are generally following the weather. When it’s in full swing, there are tens of thousands of relatively small blacktip sharks (some big ones) swimming in extremely close proximity to the beaches along the East Coast of Florida like Palm Beach, Ft. Lauderdale, and Miami Beach.

The annual blacktip shark migration is a personal favorite for Josh from BlacktipH, the largest fishing channel on YouTube. He’s pretty much out there every day during the migration with his drone hoping to capture some wild footage and that’s exactly what he got with last year’s migration.

He released this re-cut and new footage from the most recent migration and here we see a giant Hammerhead Shark weighing over 1,000-pounds stalking the smaller blacktip sharks before eating one alive. It’s not often that you see shark-on-shark violence like this but that’s what makes this footage so unbelievable.

I missed ALL of the tarpon fishing season in my part of Florida this year and I’ve really had that itch to go fishing lately. I think it’s about time I pop on down to the Florida Everglades for a backcountry trip for sharks, snook, and tarpon.

If you’re looking for some more badass fishing footage then definitely don’t head out yet, check out this footage of Josh from BlacktipH going ‘drone fishing’ with Capt. Jimmy from Everglades Fishing Co. who I went fishing with last year. Jimmy’s a great guide and he spends a LOT of time scouring Google Earth each week to always ensure he has the best spots to catch fish given the conditions.

Want to catch up on the latest fishing news? Just click that link and check out all of the recent fishing coverage here on BroBible.