How Do I Ask My Girlfriend To Stop Charging Stuff To My Account At The Country Club? 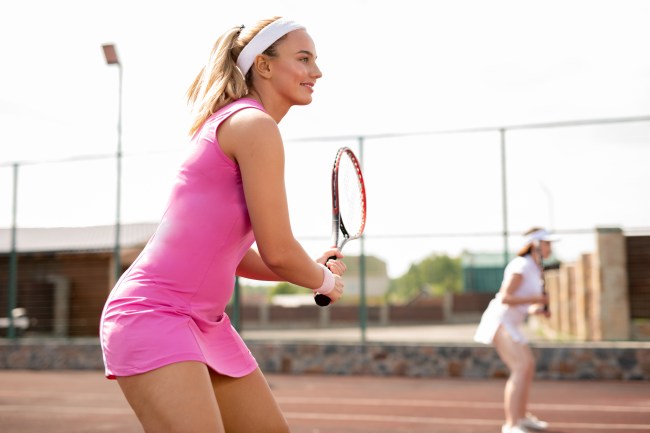 It all started with me telling her my member number. Seemed like a good idea at the time. Sort of like enabling location sharing one day because you’re trying to find each other in a dust cloud at Burning Man. A week later, you emerge from a coma together and you start to disable location sharing because clearly, you found each other, and she says “leave it on.” And now she knows where you are at all times, like the contact-tracing arm of the government of South Korea. So you start leaving your phone for two-hour stints in a locker at the gym, just to get some alone time at The Sudsy Lotus—your favorite neighborhood retreat with its plush red carpeting and attentive staff. You probably have two months of that before she starts wondering why your body isn’t improving from your 3x/week two-hour lifting sessions.

We do our own thing at the country club. She plays tennis while I play golf. It’s harmonious. Then we meet for a blueberry margarita and some potstickers on the patio at twilight. It’s pleasant, and given the food minimum that is baked in to the annual dues, I don’t feel like I’m spending real money when we eat there—gotta spend it or I lose it. I even told her about the food minimum. That was mistake #2.

She’s not a member. She grew up away from the chalky clay courts and snack shack grilled cheeses of country club life, working summer jobs at the local pharmacy where she saved for college by ferreting away prescription pills to sell in the bathroom of her public high school. Haha I’m kidding; she’s no criminal. But she did grow up working her ass off and I love that about her because her bar for luxury is low.

It wasn’t until we relocated to Maine for quarantine that she was introduced to the wonders of paying for the things by reciting a member number. Hell, by July, we had become such regulars are the club that they don’t even ask for the number anymore, and that’s even more dangerous. Because then, there’s no hint of a transaction; life at the country club is free, until you’re emailed your monthly statement and you wonder if a tribe of starving alcoholics hijacked your account.

She’s taken to tennis lessons. Privates twice a week, plus the ladies clinic on Fridays. She did her research in New York and found that private tennis lessons ran $100+ in the city, so when she learned that lessons were $35/hour here in Maine, I told her to load up. We dream of winning the mixed-doubles club championship one day. We’re a long way off, but I plan to hit bomb serves with the intent to injure the female opponent, forcing the other team to forfeit. It’s not a noble way to win, but getting your name and picture on the wall of champions is worth a few cases of internal bleeding. Step in the ring with the bull, you’re going to get the horns, Tricia. That’s gender equality.

But now she’s grown comfortable. She has embraced the invisible, forgettable currency of the country club. A new tennis skirt in the pro shop? Throw it on the tab. Fresh can of balls? Ding. Chicken caesar wraps for the table? On me, ladies. And as the great Gary Gulman once said, it only adds up… if you add it up. And I’ve been adding it up.

I’ve considered telling her to slow down her spending on the account. But that doesn’t seem fair, given that I have no plans of cutting back either. What’s more, her freedom to enjoy the club is what allows me to play golf without feeling rushed or guilty. I suppose I could get her her own membership, but that doesn’t make financial sense given that we’re planning to move back to New York in a few weeks. Ugh, a true Sophie’s choice.

I don’t have a solution. I will suffer for weeks and build more and more resentment as I pore over billing statements. We’ve blown through the food minimum by now. It’s all real money. Nothing is fun anymore.