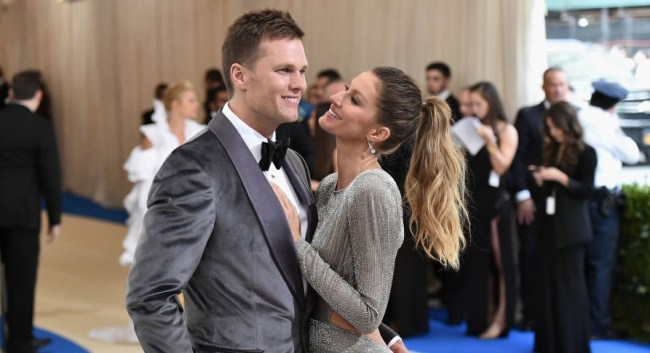 Tom Brady and Gisele Bundchen have been married for nine years, which in celebrity marriage is the equivalent to six lifetimes. Brady popped the question in January 2009, and the two tied the knot one month later in a Santa Monica, California church with just immediate family and close friends.

Gisele was recently featured in a Vogue cover story where she was asked 73 questions about her professional and personal life. At one point, the 37-year-old former supermodel was asked what the most romantic thing Tom Brady did for her. Her reponse: how he proposed.

He made up this whole story (about) how my apartment was flooding and I ran over there to try to fix the situation when I got there. The whole apartment had candles and rose petals everywhere.

And then he went down on his knees to propose. And I’m like “GET UP!” because he just had surgery and had three staph infections. I’m like, “WHAT ARE YOU DOING?”

Brady said after the wedding they “went back to the house and I barbecued aged New York strips. We had champagne, a cake, some ice cream. It was a great night.”

The proposal sounded decently romantic but how on earth can it beat this:

Check out the whole Vogue interview below: