Internet Reacts To ‘Godzilla Vs. Kong’ With Memes As Electric As The Battle Itself 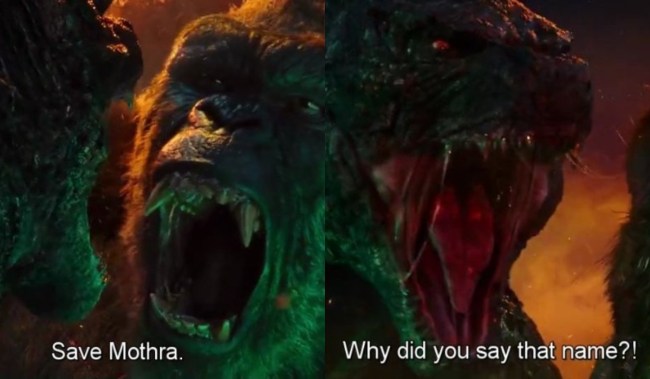 Seven months ago, while the United States and the rest of the globe were still at the height of the pandemic, Warner Bros. — likely largely influenced by Christopher Nolan — decided to release Tenet in theaters. I live in New Jersey, so I was actually able to see Tenet at our local spot. There was only one other dude in the theater with me, and honestly, it was a pleasant experience, but unfortunately for both studios and movie theaters, my anecdote isn’t the point. The point is that not enough people decided to, or were allowed to, head to theaters to see Tenet, denying Nolan of his dream of saving the movie theater business.

Instead, as fate would have it, it appears Godzilla vs. Kong, a.k.a. Thicc Lizard vs. Big Monke, a.k.a. the fourth film in Warner Bros’ “MonsterVerse”, is the movie that’s going to claim the mantle of theater-saving-king, as it already set an overseas box-office record during the pandemic ($121 million opening weekend) and will screen in more than 3,000 North American locations, which is more than any other pandemic-era release.

All that said, while Godzilla vs. Kong seems to mark the *beginning* of the return of movie theaters, the fact remains that Warner Bros. is still releasing most of their 2021 slate on HBO Max that same day, which leaves Twitter as the internet’s living room, where everyone can get together and talk about, but mostly joke about, what they’ve just seen: two hours of Thicc Lizards vs. Big Monke.

WARNING: SPOILERS FOR THE “WINNER” OF GODZILLA VS. KONG WILL FOLLOW

thinking about Christopher Nolan realizing Thicc Lizard vs. Monke is what reopened movie theaters instead of TENET #GodzillaVsKong pic.twitter.com/URnVRIHSKE

All the kaiju around the world watching #Godzilla fold the new kid. #GodzillaVsKong pic.twitter.com/J20zhOF2a3

Apex everytime they do a test and Godzilla shows up!! #GodzillaVsKong pic.twitter.com/vZuqWHvWNc

Godzilla when he saw Kong helping him with Mecha #GodzillaVsKong pic.twitter.com/7ng4d6m9h8

‘Godzilla vs. Kong’ is now playing in theaters and streaming exclusively on HBO Mac.