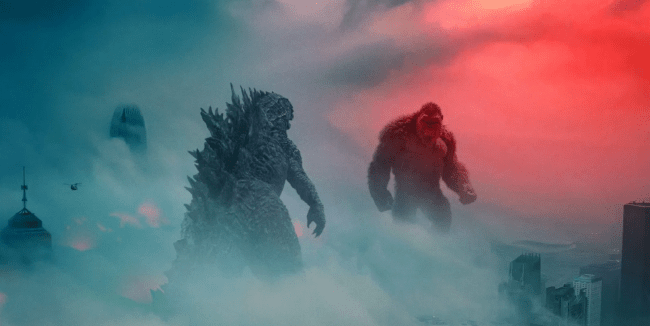 The inherent issue with slapping a big ole “versus” in the middle of your movie’s title is that everything except the titular battle, due to the film’s very plot construction, becomes irrelevant.

Let’s take Batman v. Superman: Dawn of Justice, for example: when you’re spending an entire movie waiting for the two most popular superheroes of all-time to kick the crap out of each other, it can become difficult to care about Lois Lane’s investigatory journalism subplot. This is, of course, no knock against the excellent Amy Adams or the timeless Lois Lane character, but rather an observation of the effects of selling your film as if it were a heavyweight title fight rather than an actual movie: once the audience knows what the main event is, the undercard simply becomes an obstacle to that, a waiting room for that. You’ll understand what I mean once you see how Brian Tyree Henry and Millie Bobby Brown are deployed, taking the audience through a shoddily shoehorned, properly preposterous subplot.

Therein lies the problem with Godzilla vs. Kong: the film, and the fans watching, are so consumed with the end result that the means put in place to get there risk tanking the whole thing. The plot — and some of the dialogue built around that plot — is so non-sensical, so eye-rolling, so cringeworthy (get ready for the ole monster-has-inexplicable-soft-spot-for-cute-child trope!), that you’re reminded making a good movie isn’t simply about getting two heavyweights in the ring together, but about the reason they’re getting in the ring in the first place. Why do you think Conor McGregor and Floyd Mayweather did four separate press conferences in the lead-up to their historic bout a few summers ago?

For better or for worse, Batman v. Superman: Dawn of Justice understood that, therefore spending most of its first 90 minutes underlining why Bruce Wayne felt he had no choice but to kill the Kryptonian. While the ultimate battle and resolution (Martha!!!) might’ve been underwhelming, at least Batman’s motivations for partaking in such a titanic scrap against an all-powerful, nearly omnipotent alien were clear. That is absolutely not the case in Godzilla vs. Kong, as the motivation for the pair’s conflict stems from an oft-mentioned, under-explained “ancient rivalry” and something to do with an energy source at the center of the Earth.

To be fair, though, given that this is a movie titled Godzilla vs. Kong, judging it solely on the strength of its plot would be ignorant. No one’s going to see this film for its tight three-act structure, crisp dialogue, and moving character development. They aren’t going for the undercard, they’re going for the main event: Godzilla vs. Kong. And the main event is… solid. Godzilla and Kong trade blows a handful of times, each of which represents the film’s best moments, particularly the pair’s first overseas encounter. Considering how inherently chaotic and destructive a fight between monsters the size of skyscrapers would be, all of the set-pieces are smoothly, but more importantly, coherently choreographed. The action is slick and the movement is fluid. The battle sequences *had to* be nailed and director Adam Wingard did exactly that. But as I mentioned before, if you don’t understand why the pair are fighting, or at least buy into the hype surrounding it, all of the admittedly impressive CGI falls as hollow as the Earth the titans are standing on.

When it comes to mindless, booming, technicolor, 110 mph entertainment, Godzilla vs. Kong succeeds. But that’s all it is and all it needs to be: color and noise.

‘Godzilla vs. Kong’ will hit HBO Max and theaters on Wednesday, March 31.