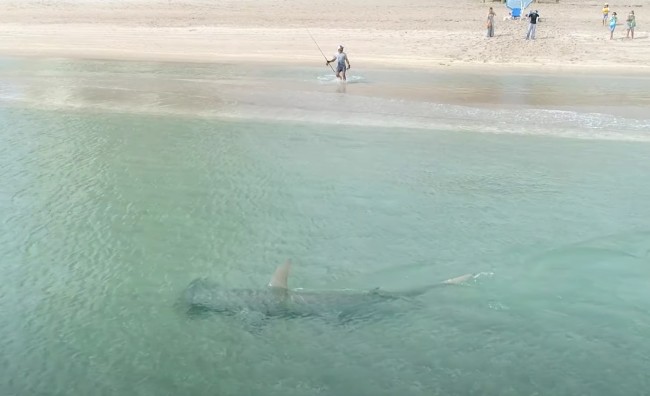 Every about mid-way through the summer tens of thousands of blacktip sharks show up off the East Coast of Florida during an annual migration. And by ‘off the coast’ I mean these sharks are swimming so close to the beach they might as well be on the sand.

They follow huge schools of baitfish and these ‘bait balls’ find themselves condensed into groups that are easy for predators to attack. The sharks can just ravage them for an easy meal. And this triggers all aspects of the food chain including MASSIVE sharks showing up to feast on smaller sharks along with the baitfish.

Year after year, Josh from BlacktipH has been able to capture the best footage around of these massive sharks swimming in just a few feet of water right off the beach. In his latest clip, he’s used a drone to film a gargantuan hammerhead shark who is swimming in the shallows and hunting the smaller blacktip sharks. I’ve also included a second clip below of a feeding frenzy from last year.

Hammerhead sharks are found all across the planet but they particularly love the coast of Florida when there are easy meals to be had. Here’s the latest footage which he’s named ‘Giant Hammerhead Sharks Hunting Blacktip Sharks 3’:

If you thought that was wild, here’s ‘Giant Hammerhead Sharks Hunting Blacktip Sharks 2’ from this time last year. In this footage we actually see a blacktip shark getting destroyed by one of these massive hammerhead sharks.

The Giant Hammerhead shark you see here was estimated to weigh over 1,000 pounds and you can really get a sense of that from this feeding footage.

It’s a little chilling to see massive Great Hammerhead Sharks that close to the beach in the middle of Summer and also to see those huge schools of blacktip sharks swimming just feet off the beach but I have to remind myself that’s always been the case, it’s only thanks to drone footage that we’re now able to see them easier and know that these sharks have been there all along.