A Great White Shark Weighing An Estimated 3,000-Pounds Got Waaaaayyyyy Too Close For Comfort Off Ocean City 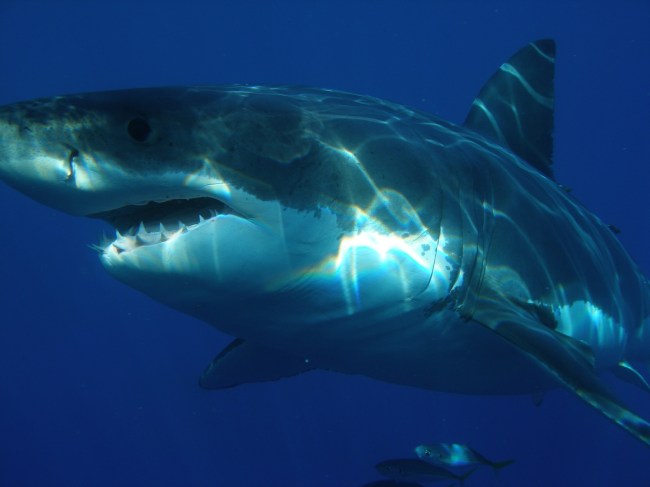 This truly is one of the friendliest Great White Sharks I’ve ever seen filmed on the East Coast of the United States and by ‘friendly’ I mean this shark was way too comfortable chilling around that boat and clearly knew he was in charge of the situation.

The shark was spotted by some fishermen off of Ocean City, Maryland who were aboard the charter boat ‘Fish Finder’. They had the cameras rolling and plenty of bait + chum to keep the Great White interested to capture the surreal footage.

This Great White Shark weighed an estimated 2,000 to 3,000 pounds and measured somewhere between 15 to 18-feet in length and the excitement of those on board the boat is palpable in the video. This is probably a once-in-a-lifetime encounter. The man who filmed the video, Steven White, says the shark hung around for 10 to 15 minutes while circling the boat.

It all went down just this past Monday after they’d just pulled their lines out of the water and finished fishing for the day. To keep the shark around a little longer they tossed the leftover bait overboard and this bus-sized Great White was treated to an easy snack. This is one of those situations where I’m seriously considering the size of my boat compared to the size of the shark and realizing it might be time to go.

This quote that fishermen Steven White gave to Local21News has me confused:

“Other than in an aquarium, that’s the first White I’ve seen in the wild, I have a whole new perspective on what a really big fish in the ocean looks like,” said White.

Great White Sharks cannot survive in captivity and there isn’t an aquarium in the world that has one at the moment, so I’m not really sure what he’s referring to there.

It’s not uncommon for these Great Whites to be in the Mid-Atlantic this time of year as they migrate north for the Summer to their fertile hunting and breeding grounds in the Northeast. But it is a once-in-a-lifetime opportunity to get to spend that much time up close to a shark that size for such a long period of time in the wild.

Completely unrelated, my cousin took this video two weeks ago in the Gulf of Mexico. They were headed back in after fishing offshore and came across this full-grown whale shark: