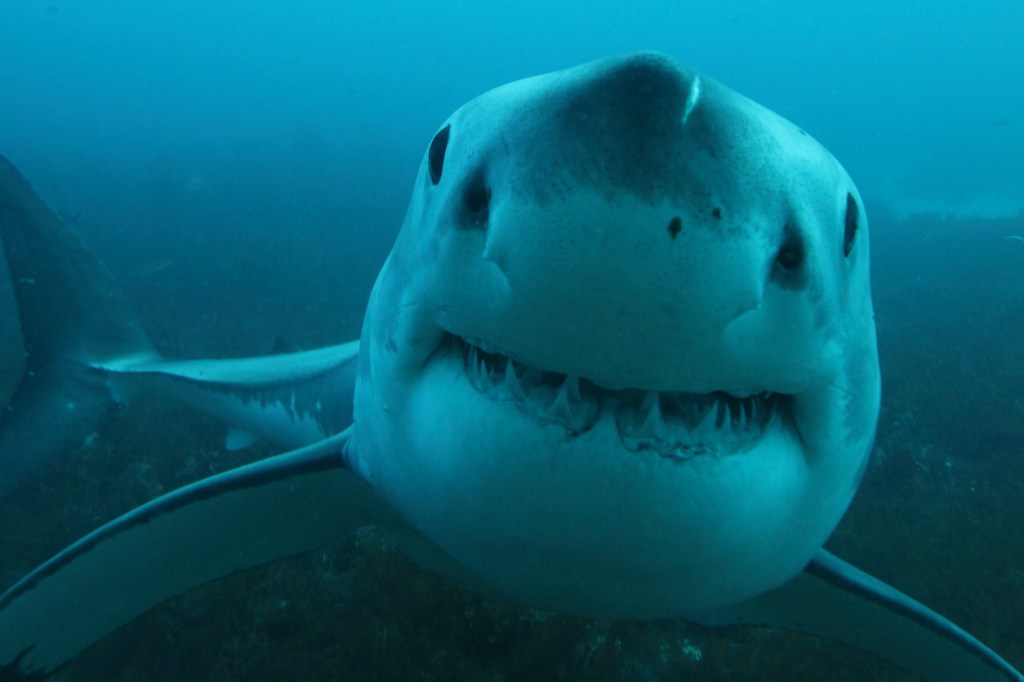 A spearfisherman in the Outer Banks had the closest possible encounter (outside of a shark cage) with a great white shark and he has the underwater footage to prove it.

David Scherrer was spearfishing in the Outer Banks, North Carolina about 20 miles offshore. They were down about 50 feet below the surface when the curious great white shark showed up and the mood changed quickly.

The massive great white shark appeared more curious than anything. It swirled around the spearfishing diver who had his speargun in hand and then swam straight at David Scherrer before turning away at the last moment. Comments on social media after the video was posted shed some light on just how nervous the diver was. Basically, if that shark opened its mouth the trigger on the speargun was getting pulled but all’s well that ends well as they have some awesome footage of the close encounter.

22-year-old David Sherrer spoke with The Virginia Pilot about his close encounter with the apex predator. They estimate this great white was somewhere in the realm of 10-feet-long.

Scherrer told The Pilot ““At first, I thought it was awesome. It’s a pretty unique experience just to see one, but as it started going towards me it wasn’t so cool anymore.”

It’s unclear if firing a speargun bolt at a great white shark from point blank range like that would’ve done anything other than piss the shark off, startle it, release blood in the water to attract other sharks, or any number of other possibilities. But it never came to that as the curious shark didn’t ever make contact.

In his experience with great white sharks and other shark species, they rarely if ever swim directly at a diver unless the situation is confrontational. He told the paper “normally when that happens, things end a bit more dramatically.”

After that shark showed up the group of divers called it a day and left with the fish they’d already shot which was plenty.

Great White Sharks off the East Coast typically hang around Cape Code and the Northern Atlantic throughout the Summer and into early Fall. These massive sharks start migrating down the Eastern seaboard and chill out off North Carolina and in the Hilton Head region. Some of them swim all the way down to Florida. A few hang out in Cape Cod a lot later than normal because it’s been a disturbingly hot Fall and Winter so far:

Even though we have passed peak season for white shark activity along the Cape Cod coast, it is important to note that white sharks are still in the area. Thank you to R. Nossa for sharing this footage that he took of a seal predation on 11/7 near the s. tip of Monomoy Island. pic.twitter.com/ltZtvzpAXW

It is pretty epic that David Scherrer had the camera rolling and was able to capture the once-in-a-lifetime too-close-for-comfort encounter with that massive great white shark.